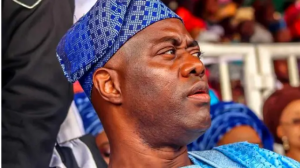 He described the sudden demise of Ajiboye as a painful loss, praying to God to grant the Chairman of the Fresh FM Stations, Dr. Yinka Ayefele, the Ajiboye family, and the management of the FM stations the fortitude to bear the loss.

The governor, who equally prayed for the repose of the soul of the renowned media and entertainment chief, also expressed his condolences to the family he left behind.

A statement by the Special Assistant (Print Media) to Governor Makinde, Moses Alao, quoted him as saying that the late Ajiboye was a vivacious and easy-going man, always full of life and ever so ready to advance the cause of the Fresh FM Stations.

nI am shocked by the news of the death of Mr. David Ajiboye, the General Manager, Fresh FM, Ado-Ekiti, after a brief illness.

“I commiserate with my friend and Chairman of Fresh FM, Evang. Dr. Yinka Ayefele, and the management of the Fresh FM Stations on the death of such a vibrant, trusted and dependable ally as Ajiboye.”

“I also express my heartfelt condolences to the immediate family of the late media and entertainment chief.”

“I got to know Ajiboye many years ago and ever since I knew him, he had always been one vivacious and lively individual, who stands solidly by whatever he believes.”

“Ajiboye was a good ambassador of the Fresh FM and certainly one its greatest defenders in all seasons. Having paid his dues as an entertainment reporter with the Tribune titles, Ajiboye further became a respected publicist and made a success of advancing Fresh FM’s cause.

“It is my prayer that God grants everyone close to him the fortitude to bear this great loss,” Makinde said.