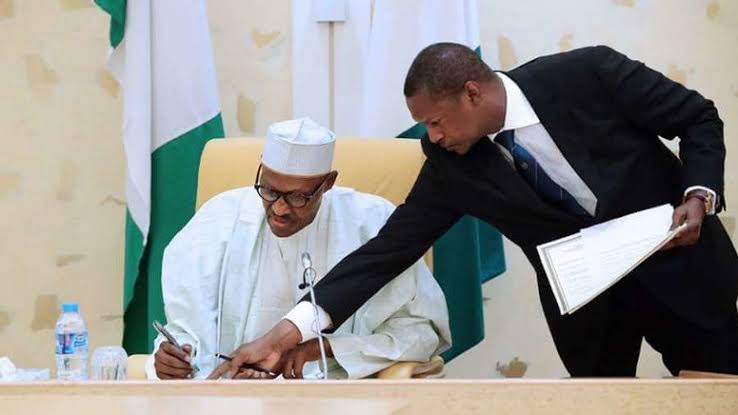 The Attorney-General of the Federation (AGF) and Minister of Justice, Mr Abubakar Malami (SAN), has written President Muhammadu Buhari, demanding the removal of the Acting Chairman of the Economic and Financial Crimes Commission, Mr Ibrahim Magu.

According to a report by ThisDay, Malami has accused the anti-graft agency boss of diverting the recovered loots.

Malami anchored his recommendation to the president on several grounds “raging from diversion of recovered loot to insubordination and misconduct” by Magu.

The report further revealed that Malami included a shortlist of three candidates for consideration to replace Magu. Given the weight of Malami’s allegations against Magu, sources quoted in the report say the president may be inclined “to set up a probe panel that will look into the veracity of the allegations and make necessary recommendations.”

Malami alleged accounting gaps or discrepancies of figures concerning the recovered assets, claiming that Magu was not transparent enough in the management of recovered assets.

Magu, 58, is a Nigerian police officer who also served during Nuhu Ribadu’s time at the anti-graft agency and was credited with part of the success Ribadu recorded in his time.

In April 2018, the Police Service Commission announced the promotion of 18 senior officers where Magu was promoted to the rank of a full commissioner from deputy commissioner of police.

Sensing mounting opposition to his retention as the EFCC boss, Magu has been on a public relations campaign spree in recent times.

He recently disclosed that the anti-graft agency has recovered assets in excess of N980 billion, in addition to private jets and oil vessels.

“Those who know the EFCC boss very well will quickly confirm that his zero tolerance for corruption is not just passionately unparalleled, but can only be equated perhaps, with that of President Muhammadu Buhari,” Ajogwu wrote.