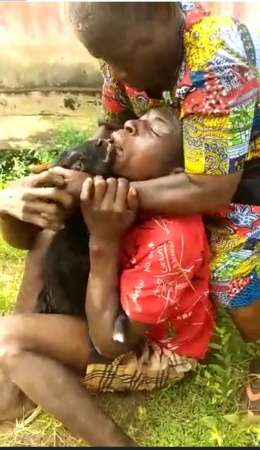 A middle-aged man, identified as Onyedika Ezennaya, was on Friday, July 22, 2022, forced to kiss a dead sheep and raw meat as a deterrent for having sex with a female sheep (ewe).

According to a video that has gone viral on social media, Ezennaya who is a native of Okpo village in Ekwulobia, Aguata Local Government Area of Anambra State, was caught while performing the act in the bush.

The male voice which gave the narrative in the video as Ezennaya was seen on the ground being forced to kiss a dead lamb, said that he subsequently strangled and broke the legs of the lamb after having sex with its mother.

The video also showed the villagers abusing and cursing the suspect right inside the bush where he was caught. They also beat him, describing the act as a taboo in the land.

The voice said: “He had sex with a mother sheep, and after that, he killed her lamb and fractured her bones. What wicked and abominable act!”

When contacted for his reaction, the Police Public Relations Officer (PPRO), DSP Tochukwu Ikenga, advised the people to take the suspect to the nearest Police Station, saying that jungle justice is never the best option whenever a suspect is apprehended by people.