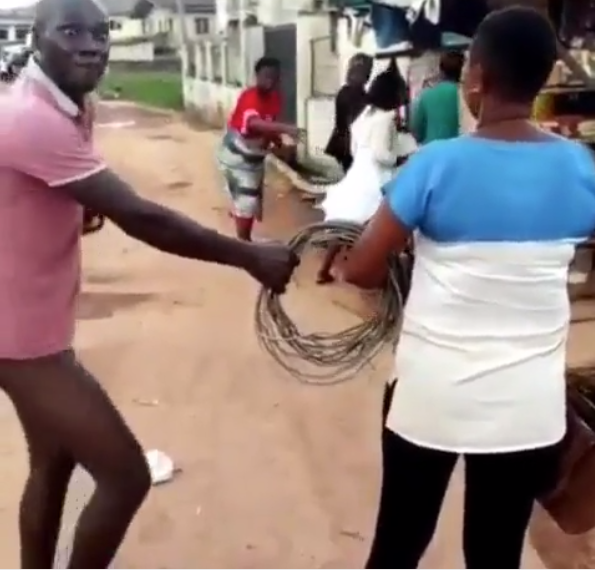 An aggrieved electricity consumer pulled down his trousers and remove his penis as he threatened to rape a PHCN staff for disconnecting his power cable.

In a video going viral on social media, the man is seen complaining bitterly about his power supply getting disconnected, despite paying.

The DISCOS staff is seen holding his disconnected cable in her arm while the man struggles to get it back. He asks her a few times to release the power cables but she remains adamant.

The man goes on to claim that his son “was killed along the line” after his power cable was disconnected.

As PHCN officials filmed him and the woman still refused to release the cable, he threatened to rape the woman.

Everyone obviously thought he wouldn’t follow through until he actually pulled his trousers and briefs to expose his naked male member.

Spectators can be seen running away from the scene when he pulled his pants. The female PHCN staff also immediately released the power cable to him and moved away.

She then revealed the bruises she sustained on her arm when the man was dragging the power cable with her.

Voices in the background can be heard calling the man a “mad man” but he didn’t care, instead he kept complaining about PHCN as he pulled his trousers back up.