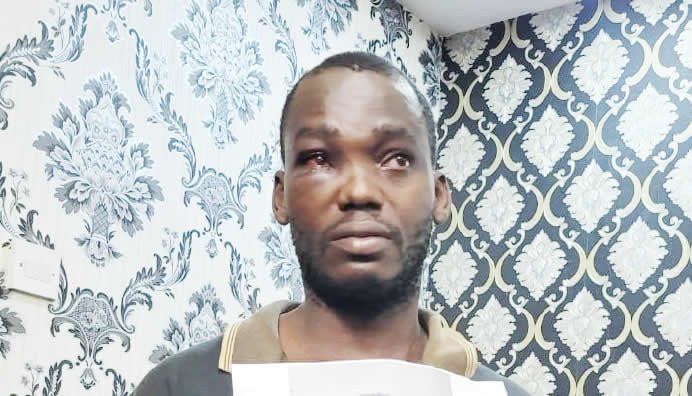 The Police in Lagos state have arrested a man identified as Benedict Anieze, for allegedly smashing the skull of his one-month-old baby on the ground, killing her on the spot.

The incident occurred at their residence in the Pipeline area of Idimu, Lagos State on Sunday, April 3.

Benedict was said to be at home with his wife and their baby when he suddenly went berserk, carried their child and smashed her on the ground resulting in her death.

To cover up his evil act, Benedict allegedly set his house on fire before taken to his heels.

Confirming the incident to newsmen, the spokesperson of the Lagos state police command, SP Benjamin Hundeyin, said that the police alongside neighbours tracked down the suspect to a location in the area, where he was arrested.

“There was no argument between him and his wife. He said he was possessed by evil spirits when he smashed the baby on the ground. He also set the house ablaze and ran away.

The wife cried out and after putting out the fire, they brought her to the station. The police alongside neighbours tracked him down to the place where he was arrested.

The corpse has been deposited at the Yaba General Hospital’s morgue.”

Hundeyin added that the case has been transferred to the State Criminal Investigation Department for further investigation.