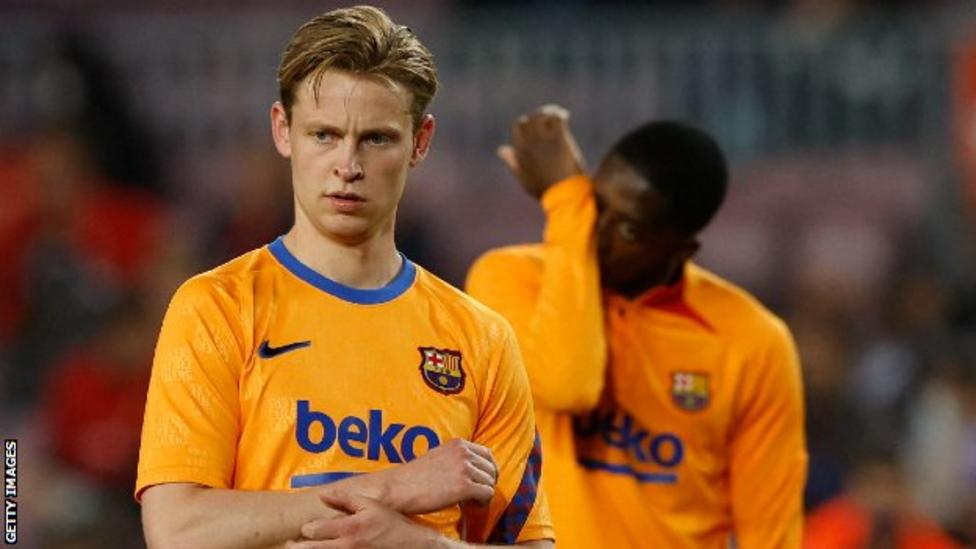 Manchester United have agreed a £63.5m deal with Barcelona for Frenkie de Jong but there is still no guarantee the move will go ahead.

Senior club figures have travelled to Barcelona to try to push through a deal for the Netherlands midfielder, 25.

They now know what they have to pay for manager Erik ten Hag’s key target, with the agreed deal equating to a bigger up-front payment and £8.5m in add-ons.

However, the player’s dispute with Barcelona is threatening the move.

All the latest Man Utd news in one place
The contractual disagreement centres on deferred payments that were included in the playmaker’s new four-year deal that only became active on 1 July.

There have been widespread reports in Spain that Barcelona have told De Jong he needs to leave for financial reasons.

However, the former Ajax player knows the Catalan must honour his contract if he chooses to remain at the Nou Camp and he is understood to be reluctant to leave without an agreement over his exit terms, which would take into account the deferred payments.

Ajax defender Martinez in advanced talks
Chelsea end interest in signing Ronaldo
United have alternatives should De Jong not join but are willing to give the situation more time to resolve itself before taking an alternative course.

Meanwhile the club are also still unsure if Cristiano Ronaldo will return to pre-season training.

Confirmation that Chelsea are no longer interested in signing the 37-year-old has reduced his options away from Old Trafford.

BBC Sport understands there is substance to reports of a huge offer to Ronaldo from Saudi Arabia but the player is believed to want to keep playing at the highest possible level. (BBC Sports)