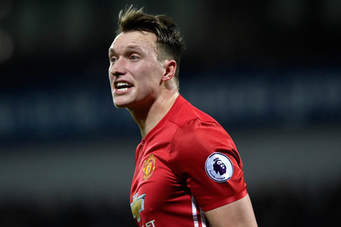 Manchester United defender Phil Jones is set to return to play against Tottenham Hotspur at Old Trafford on Saturday, Jose Mourinho has confirmed.

The England international limped out of United’s 2-1 defeat to Huddersfield on Saturday with a leg injury.

The 25-year-old’s been in great form so far this term and the Red Devils have conceded just twice with Jones on the pitch this season.

United beat Swansea 2-1 in League Cup to progress to the quarter-finals and Jones was able to take a place on the bench.

And Mourinho confirmed afterwards that he should be able to start against Mauricio Pochettino’s high-flying Spurs side.

‘I think Jones will be [ready] because today he told me If I needed him he will be ready,’ Mourinho told reporters.

‘So he will be even better by Saturday.’

United are nursing a number of injuries going into Saturday’s clash with Marouane Fellaini, Paul Pogba and Michael Carrick all doubts.

However, Mourinho seemed downbeat about the chances of welcoming any of those players back into the fold.

1 thought on “Man United to welcome star against spurs”