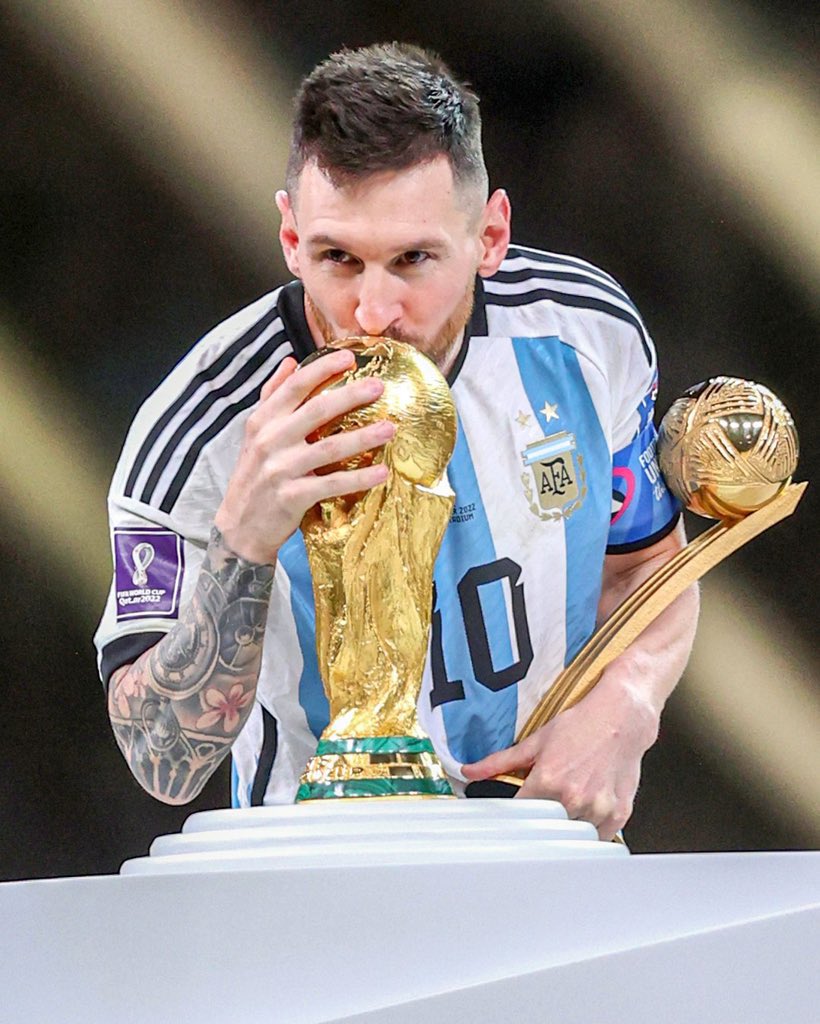 Lionel Messi always inflicted me with a binary disease. I love him, but not his country. Any time I saw him play, he revived the maestro of my boyhood fancy: Haruna Ilerika. He is small, just like Haruna. He is a leftie, just like Nigeria’s former number nine who clutched Africa player of the year honours twice. He enjoys the dribble run, cuts through defences like a tailor through satin (fans often called Ilerika Tailor), browbeats marque defenders, executes an economy of schemes, pearls passes that even his opponent envies, takes the game like a writer cherishes poetry.

I wanted France to beat Messi’s country, if I had a heartbeat for Messi’s game. It is a nation that never liked blacks. While Brazil is content to place its dark people in its ghettoes and salve its conscience by cultivating its Peles, their southern cousins decided to wipe them out. In a whitewashing sweep, they removed every trace of black people from their soils.

They did not only cleanse the blacks out of their lands, they whitewashed its telling. They do not want even their forbears to know what happened. Today’s argentines do not learn that aspect of their butchery. They were the ancestors of Hitler. But no one can deny the story. Some of their leaders are even proud of it. One of their former presidents, Carlos Menem once quipped: “In Argentina, blacks do not exist, that is a Brazilian problem.”

Blacks worked in the plantations of Argentina as they did in Brazil. At one time, half the population of Buenos Aires was black. They envied the human landscape of their European fellows, and so killed black after black. There was no mercy. They still love their country that way. It is the only country in Latin and South America that does not even feature a black player. It is the continent’s rampant bigot, an oasis of prejudice. It deprived itself the opportunity to discriminate, to kill blacks on the streets or even to dump them in slums and confront a moral crisis of immiserating them like we see in Europe and North America. Its ancestors committed the iniquities so as to sanctify them.

When Nigeria beat Brazil in the Olympics decades ago to meet Argentina in the finals, a newspaper printed a headline that read, “Let the monkeys come.” A BBC broadcaster replied, if the Nigerians are monkeys, then the Argentines are bananas. In the end, Nigeria ate them up for gold.

We are not going to see Argentina apologise soon for its pogrom. Its citizens don’t even know enough of it to apologise. It is not the debate front burner. But history haunts like a witch. Nero wanted to do same to Christians. When asked how history would judge him, he said by the time he was done with the followers of Jesus, history would not be sure they ever existed. Just like Nero, the Argentines were wrong. They are not even aware that their tango dance has ancestry in the rhythms of slave dance. It was what Dereck Walcott, a Caribbean poet wrote, “I met history, but it didn’t recognise me.”
Yet I celebrate Messi. It gives me a schizophrenic bump, though. But it is the way it is. I accept his humanity. I adore his talent. He has also put paid, with this one act, his rivalry with Ronaldo. Both guys are hard to throw up in a generation. One a Portuguese, the other an Argentine. One feisty, the other shy and unobtrusive. About a week, I discussed it with my colleague and friend Femi Macaulay, and I was wading in favour of Ronaldo. But Ronaldo can never win a world cup. 2022 is an EXCLAMATION point for Messi. It is the culmination of struggles. Messi is lucky. He has a team fiercer than Ronaldo’s. As Conrad wrote in a Heart of Darkness, “Our strengths are accidents arising from the weaknesses of others.” Messi entertained and fate gave him a last hurrah. If Portugal paraded a cast like Messi had, maybe both would have squared it off in the final. Not to be.

Ronaldo shed tears when Morocco seared his dreams. Was he thinking of Messi? Did he wish Messi lost against France? That was all moot as Messi clutched the cup and his teammates hugged him because it was at once a collective dream as it was Messi’s.

Speaking of teammates, he shared the spotlight with Kylian Mbappe whose presence and a hat trick gave us a rare moment in football. Messi hoisted the cup, Mbappe wears the golden boot. Mbappe becomes the second person to score a hat trick in a world cup final. He scored four if we count the penalty shootout.

This is no time to weep for France. France does not have a glorious history of racism either. It is a colonial giant. Macron almost leapt when Mbappe touch equalised the scores. But an Mbappe outside of soccer might not be accepted in a middleclass suburb in France. Their colonial history of assimilation treated Africans with malignant contempt, like children who must be taught how to wear their panties and button their shirts.

The final was an apotheosis of a career and the handing over of the baton. Exit Messi. Enter Mbappe. Few moments in history give such emilokan moments.

When the World Cup began some Nigerian sports pundits handed it to Brazil. I was wary. They had disappointed me too often. And when the game began, their show was anaemic triumphs. They had grace but not speed. They had talent but not chemistry. They displayed flashes but could not blind the sky like a threatening storm. They passed as though to pass the time.

Argentina wins its third World Cup. It seems when they have a world class player, he must have his emilokan hour. Kempes did it in 1978. Maradona dribbled his way to the crown in the 1990s. Messi today.

Morocco gave me a pride and confusion. Was I going to support my black folks in a white man’s land or my Arab neighbours of Africa? It was a dilemma only resolved by the result. I was proud to see an African team best many a giant even if they could not be the best.

An unsung hero of the World Cup is the Croatia fellow called Luka Modric. He is a technician of the game and one of the best ever to place foot to ball in any colour.

Well, this was a fiesta without Nigeria. Nigeria ought to be there. But we are not there because of so many things that are not there in our history. Croatia has about four million people and placed third. We have to ruminate and develop first and not wait for accidents to make us great. A nation does not win with talent alone. It fights with a spirit. Mbappe and company may not have won, but we witnessed the spirit of their fight, their heroic joust with Messi and his kaleidoscope of go-getters. Until we mint the Nigerian spirit, all the big-name players we have in Europe will be only careerists, not nationalists on the turf of play.

This article was first published in The Nation newspaper, 19/12/2022