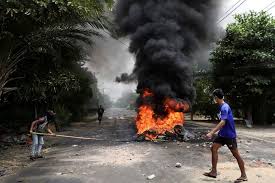 Myanmar security forces fired shots and arrested about 30 people at an anti-coup rally in the country’s second-biggest city on Wednesday, witnesses said, as protesters kept defying a months-long crackdown by a junta struggling to impose order.

Chaos erupted in Mandalay, a hotbed of anti-military sentiment, when plainclothes police emerged from vehicles minutes into a protest, firing guns and beating demonstrators who fell as hundreds fled, according to four witnesses. They said they saw about 30 people arrested.

“There are no words to describe their cruelty,” Aung Pyae Sone Phyo, 21, a protest leader, told Reuters. “They used enormous force to crack down on us. More than 10 military vehicles filled the little ward, they blocked every road in the area,” he said.

“We will keep doing what we are doing until our revolution prevails.”

Myanmar has been gripped by protests and deadly violence since the military seized power from an elected government on Feb. 1, unleashing an outpouring of public anger and international condemnation of the junta’s lethal response.

Many demonstrators back a National Unity Government (NUG), an anti-junta coalition that has declared itself Myanmar’s legitimate authority and pushed hard for international recognition and support.

The State Department said on Wednesday U.S. officials had held conversations with the NUG where it outlined its inclusive vision for a diverse, unified, federal democracy.

“The U.S. will continue to support all those working peacefully to restore Burma to the path of democracy and urges the military to cease its violent actions and release all those unjustly detained,” a State Department spokesperson said.

Hnin, a frontline protester in Mandalay, said security forces held demonstrators to the ground, beating some and confiscating many motorcycles.

“They pushed their faces to the wall. Some were beaten by the soldiers and plainclothes security members,” she said.

Myanmar has seen a succession of small explosions in recent weeks, some at government offices and military facilities, while several junta-appointed administrators have been fatally stabbed.

A group calling itself the People’s Defence Force in Tamu in the central Sagaing region said it had killed 15 security personnel in separate clashes on Tuesday night and early on Wednesday. State MRTV in its nightly news said one member of the security forces was wounded in an attack by “terrorists”.

It followed an ambush that killed three soldiers on Monday, claimed by another militia in Sagaing, just days after the NUG announced the formation of a People’s Defence Force to fight the military.

Military-controlled media said 39 people had been arrested across the country on suspicion of orchestrating explosions and arson attacks, as well as seeking military training with an ethnic minority rebel group.

It said 48 “handmade mines”, 20 sticks of TNT, gunpowder, detonators, fuses and other material had been seized in a raid.

With 783 people killed in the suppression of protests, according to an advocacy group, some supporters of the ousted government have sought military training with insurgents that have battled the military for decades in remote border regions.

The United Nations cites the same death toll. Reuters is unable to independently verify casualties and the military has imposed restrictions on the media, internet services and satellite broadcasts.

The military ruled Myanmar, once known as Burma, from 1962 to 2011 before launching a phased transition to democracy that led to unprecedented economic and political reforms and modernisation under a quasi-civilian government.

But its intervention after only a decade has rekindled memories of oppressive rule and economic mismanagement that pro-democracy groups say people will not tolerate again.

The military said it seized power because its complaints of fraud in a November election won in a landslide by Aung San Suu Kyi’s party were not addressed by an election commission that deemed the vote fair.

The United States, European Union and Britain have imposed targeted sanctions on the generals and the military’s businesses, while activists have urged the United Nations Security Council to impose an arms embargo on Myanmar.