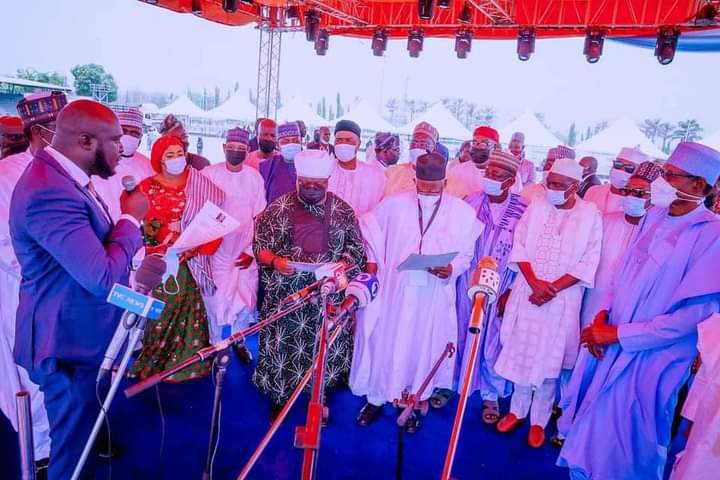 The Chief Press Secretary to Governor Gboyega Oyetola, Mr Ismail Omipidan has described the narrative that the All Progressives Congress has handed over its leadership to members of the People’s Democratic Party as a false narrative.

Omipidan, in a piece obtained by InsightMedia in Abuja, said the new National Chairman of the APC, Senator Abdullahi Adamu joined the APC months after it was formed. He said the party had not gone into any elections before Adamu joined.

The former Political Editor also stated that the the newly National Secretary of the party, Iyiola Omisore was a foundation member of the Alliance for Democracy.

The statement read, “My intervention this afternoon is, therefore, to help unsuspecting Nigerians have understanding of the issues at stake on the just-concluded national convention of the ruling party, the APC. And I am making it in good faith to help refresh our memories and put issues in perspective as a former Political Editor.

“First, it is totally untrue to hold the view that the leadership of the ruling All Progressives Congress, APC, has been handed over to the Peoples Democratic Party, PDP.

“To the best of my knowledge, while it is true that the new APC National Chairman had his foundation in the PDP, the mere fact that he and other 10 PDP Senators joined the APC on January 29, 2014, makes him a foundation member, since the party was birthed in February, 2013. The APC had not even won any election at that time. This is clearly different from what happened in the PDP in February 2016, where it made someone who was barely a year old in the party, its National Chairman. Interestingly, it happened at a time the fellow was negotiating his return to the APC.

“But in this instance, Senator Adamu has spent eight years out of the nine years existence of the ruling party within the party. That’s one.

“Two, the National Secretary, Iyiola Omisore, had his foundation in the Alliance for Democracy, AD, where he was first elected Osun Deputy Governor. That he left for the PDP at some point, cannot make him a complete PDP through and through.

“Besides, the two Deputy Chairmen (North and South) Senator Abubakar Kyari and Chief Emma Eneukwu, respectively, have never had anything to do with the PDP. They started in APP and remained there throughout its metamorphosis until it became the APC.

“The Organising Secretary, Suleiman Argungu, my very good friend, was the chairman of the ANPP Integrity Group, which took up the gauntlet to reform the party at a time they believed the leadership of the ANPP was being compromised by the ruling PDP. Like the two Deputy Chairmen, he was never in PDP.

“Therefore, don’t help them spread the false narrative that APC has been handed over to the PDP. It is a fallacy.

“It is a decoy by those who understand the weakness of some readers who will swallow any narrative without asking questions or clarifying issues.

“Unfortunately for them, Nigerians are smarter than they think.”