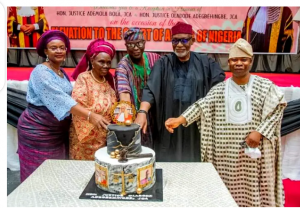 Ondo State Governor, Rotimi Akeredolu has described the two recently elevated Justices of the Court of Appeal from the state as upright Justices.

The two Judges were among the 18 new justices elevated to the Court of Appeal of Nigeria and sworn in on June 28, 2021, in Abuja.

Until their elevation, they were Justices in the State High Court, Akure, Ondo state.

Speaking at a dinner/reception organised by the state government in their honour, governor Akeredolu, who said the two Justices are held in high esteem, described them as courageous and fearless jurists.

The colourful reception held at the International Culture and Events Centre (The Dome), Akure, was attended by members of the two families, several justices and Senior Advocates of Nigeria, captains of industries, friends and well-wishers among other eminent personalities.

While congratulating them on their well-deserved elevation, Akeredolu said the state is proud to have produced upright Justices like them.

He promised to continue to push for more judges from the state to be elevated at both the Court of Appeal and the Supreme Court, saying he will not allow the state to be shortchanged in the scheme of things.

The governor also promised that retired judges in the state would be celebrated in their lifetime, even as he called for prayers for the elevated Justices to be able to discharge the onerous tasks ahead.

The Chairman of the occasion and former President of the National Industrial Court, Justice Babatunde Adejumo, appreciated the Governor for the reception in honour of the two justices.

The celebrants, Justice Ademola Bola and Justice Olabode Adegbehingbe thanked the governor for working tirelessly to ensure that the state was not shortchanged in the appointments.

Present at the event were the Deputy Governor, Lucky Aiyedatiwa, members of the Ondo State House of Assembly, Secretary to the Government, Princess Oladunni Odu and members of the State Executive Council, top government functionaries, religious leaders, traditional rulers among other dignitaries.