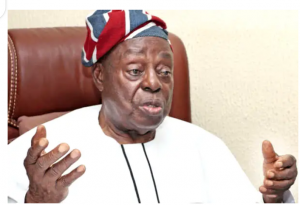 FOUNDER of the Afe Babalola University, Ado-Ekiti, ABUAD, Aare Afe Babalola, SAN, yesterday, warned that unless there is a new constitution before the 2023 general election, Nigeria will continue to recycle failed leaders.

Babalola, who said this while speaking as a special guest of honour at the 5th Ife Institute of Advanced Studies, Summer Institute Programme, taking place at the Obafemi Awolowo University, Ile-Ife, in Osun State, insisted that the 1999 Constitution remains the biggest problem of the country and that until it is replaced, Nigeria would not be able to make any meaningful progress.

Babalola said: “Those who wish this country to remain an indivisible entity, and I am one, must unite to ensure that we replace the present 1999 Constitution with a truly Federal Constitution and a Parliamentary system of government, which is more involving and less expensive.

“It is my considered view that a new constitution must be in place before the next election, otherwise we will be recycling the same failed leaders that have brought Nigeria to where it is today.

The proposed constitution will spell out the number of political parties and percentage of women representation, among others. It will also enable knowledgeable, selfless, patriotic and non-tribalistic Nigerians to emerge as leaders and make governance less expensive. In addition, it will discourage politics from being the most lucrative business in Nigeria.

Suggesting ways to avoid money playing a dominant role in the country’s election, Babalola stated that the new constitution must provide that the National Assembly shall consist of 60 per cent of Nigerians elected by Professional Bodies including the NBA, NMA, NSE, Civil Society Organizations, NLC, ASUU, TUC and NANS each of which will be allocated a particular percentage out of the 60 per cent to be elected into the Legislative Houses.

“The remaining 40 per cent shall be contested by all qualified voters. This way, we will have a Parliament consisting of 60 per cent of elected members by professionals and opinion leaders whose election will not be affected with votes bought with as little as N5,000.”

Nigeria does not need two Houses in the National Assembly. All we need is one House with the number of Legislators reduced to 50 per cent of what it is today,” he added.

Speaking on how to revive the ailing educational system in the country, Babalola emphasized that for universities to be able to perform their pivotal roles of teaching, research and community service, the government must be willing to fund education adequately by following UNESCO’s recommendation that each country should devote at least 26% of annual budget to education and provide the enabling environment for scholarship.