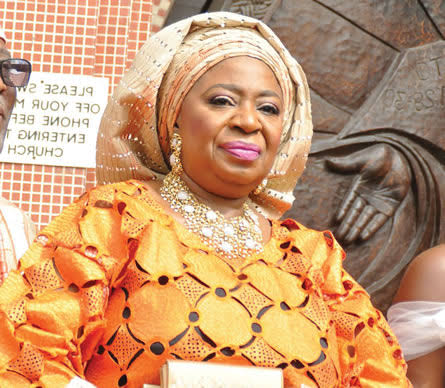 A section of leaders of the People’s Democratic Party in Ijeshaland in Osun State have insisted that the appointment of Erelu Olusola Obada as their leader is an irreversible decision.

InsightMedia on Sunday reported that some leaders of the party from the zone after s meeting in Ilesha said Chief Ebenezer Babatope remains the leader from the zone.

In another released on Tuesday, some leaders from the six local government areas in Ijesha said the appointment of the former deputy governor followed due process.

The communique read, “We read the communique issued by some individuals in Ijesaland and to our surprise Chief Babatope who is our Leader and father who we hold in high esteem and respect a lot and we will always revere him for being our father. He informed Erelu he wanted to hand over to her 2 years ago as he wanted to take things easy. He wanted her as his successor. He was said to have also participated in the meeting virtually.

“In as much as we feel that the issues of Ijesa Elders Caucus should not be discussed on the pages of newspapers or brought to social media platforms, the fact that a communique was issued and some salient points were made therein necessitates this riposte. This piece is just to set the records straight and say the facts. It is also intended to remove misconception

“We, the under-listed leaders backed the nomination of HE Erelu Olusola Obada _CON_ as conversed by Chief Ebenezer Babatope. In our own right, we hold strategic positions as stakeholders and principal interests in Ijesa Elders Caucus and will like to make it clear that leadership is a huge responsibility. Chief Ebenezer Babatope’s argument in his last meeting that he wanted to relinquish the Chairmanship of the position of the Caucus and that he wanted HE Erelu Olusola Obada, _CON_ to be his successor has been formalized and sealed.

“The assemblage of few known persons and congregation of majority who are unknown, who are neither stakeholders, who have not at any particular point in time been called nor attended meetings of the Ijesa Elders Caucus, were called by Sunday Bisi, because of his self interest is embarrassing to say the least and prosperity will judge us all. That he signed a communique on our behalf is degrading, insulting and unbecoming of a desperately and inordinately ambitious person.

“We’re not surprised at the presence of Dr. Bayo Faforiji and Prince Diran Odeyemi, if truly they participated in the plot for them to be used against the interests of Ijesaland. Their antecedents in this political clime speak volume.

“We have the list of all the Stakeholders of Ijesa Elders Caucus and majorly, 95% of the people on the list who have been attending meetings of the Caucus when Chief Ebenezer Babatope was active as the Chairman of the Elders Caucus were the ones that sat with High Chief Dele Fasheru and took a decision based on the earlier advice of Chief Ebenezer Babatope that Erelu Olusola Obada _CON_ should be his successor.

“The leadership of Ijesa Elders Caucus cannot be nominated and cannot be determined by external forces and this we will resist with everything that we have as a people. We therefore, warn that the unscrupulous elements that were called or that were drafted, especially those people that have never, at any particular point in time, been part of the stakeholders of PDP Elders Caucus but sat with Sunday Bisi and his cohorts to degrade the leadership of Ijesaland should desist from their divisive action. We are also saying that henceforth, if they sit to hold any unauthorised meetings pertaining to Ijesa Elders Caucus, it will not be tolerated.

“In view of the resolution of the Caucus, *H.E Erelu Olusola Obada _CON*_ is our next Chairman and nothing, we repeat, nothing can change that. Chief Ebenezer Babatope is not leading himself, we all cooperated with him until he called us into his house. If what he told us openly has changed, we expect him to call another meeting and communicate same to us but he is yet to do that. So, we don’t believe this present position as coming from him because he is a man of integrity who respects his own words.

“We have it on good authority that some politicians who are not from Ijesaland are the ones sponsoring the onslaught and the political fights in Ijesaland to make sure Ijesaland is not united but we will put a stop to this. If they have any ambition that they want to pursue, we will advise them to go and pursue it within the purview of the law rather than breaking up the PDP all over the place.

H.E Erelu Olusola Obada, CON has not, at any particular point in time, aspired, nominated herself, lobbied, or consulted anybody or group of people for this position, until Chief Ebenezer Babatope initiated it by calling some prominent leaders of PDP in Ijesaland especially, High Chief Dele Faseru, Senator Francis Fadahunsi, Hon. Busayo Oluwole Oke, Hon. Olasoji Adagunodo, Hon. Sanya Omirin, Hon Jide Bakare Awuyewuye, Hon Fausat Sarumi-Adebanjo, Hon Mayowa Adejoorin, Hon Sunday Bisi, Hon Ayodeji Areola, Hon Bayo Ogungbangbe* among others and held a meeting in his (Chief Ebenezer Babatope’s) house and confided in them his desire to hand over to *H.E Erelu Olusola Obada, _CON*_ . Although Sunday Bisi was the only dissent voice. His ploy was to cajole High Chief Faseru , being the Vice Leader, into contesting it. Baba Faseru accepted Erelu on her merit, good deeds and past antecedents. Hence, in fulfilment of Chief Babatope’s position, the appointment of Erelu at the domain of High Chief Dele Faseru with reputable ljesa PDP Stakeholders from the Six Local Government areas in attendance. 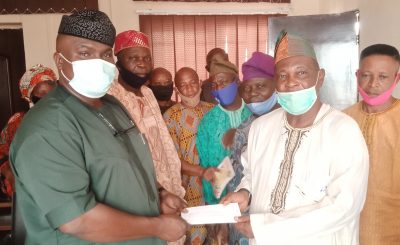