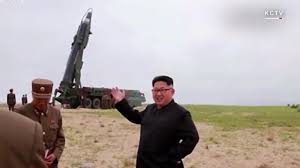 “I heaved frantically as I saw the headlines, North Korea Conducts its sixth nuclear test”

Sitted in a semi-detached, unplastered bungalow, lurking in a tiny city located in a landlocked North central city of Nigeria. One would be amazed how concerned and engrossed I am to the happenings in a region thousands of miles away. With the digital age, and the world connected as ever. Its being quite easy to access the threats and opportunities affecting our daily lives, unlike the 1960s when few knew how close the world was to a nuclear Armageddon. Sure, it should be a concern as the economic and political foreign policies initiated by Washington, Kremlin and Beijing shape our world, having a direct or indirect effect on the “Iya alakara” stationed by roadside. I glanced my phone clicking the headlines, an over enthusiastic North Korean veteran newscaster Ri Chun Lee surfaced announcing the test of an hydrogen bomb, the largest of its kind in the North Hamyong province. A remarkable successful test with vibrations far reaching the Chinese city of yanji. Although the test didn’t come as a surprise, it was least expected as all eyes was on the brics economic summit chaired by its communist ally China. This has been part of an aggressive nuclear program initiated by Democratic People Republic of Korea dating from the 1990s.These brings the question, what prompted the DPRK to invest massively in obtaining nuclear and missile technologies? Why do they chose to follow the dangerous path despite international condemnation, sanctions and isolation? What should be done to avoid and all out military confrontation in the Korean peninsula and the world at large?

This tension stemmed from the Aftermath of the World war 2. The Korea peninsula after the capture from the Control of the imperial Japanese forces, was split into two region with separate government. The US controlled South and The Soviet controlled North.The choice of Kim ll-sung led North Korea attacking the 38th parallel, the boundary between the South and North, followed by the subsequent attack and occupation of Seoul led to a 3 year war between the Koreas. This happenings prompted a direct intervention of The US and the UN in support of The South Korea. This was also aggravated by the crossing of the Yalu river by the Chinese forces with Soviet air cover. The 3 years war popularly known as the ‘Forgotten war’ ended on the 27th july 1953 with quite a significant casualties between both sides, amounting to 2.5 million lives lost. A peace treaty wasn’t achieved, instead an armistice ending hostilities. This has resulted to a non combatant but technical war between the two Asian neighbours.The United states has since placed a considerable number of troops in South Korea, coupled with annual war games in its North Korean border, which has received heavy backlash from the North accusing her counterpart of a preparation for an invasion, and has also cited the actions have a means to accelerate his nuclear programme. The election of Donald trump whom cited Iran and North Korea as his major foreign policy goals has increased the momentum in the Korean peninsula. The never-ending rhetorics has a raised eyebrow, with the US president labelling his Counterpart a “Rocket man” on a suicide mission, promising to totally destroy the North in the event of a war. This wasn’t left unanswered, as The Korean leader warns it could take a first strike on US Pacific island of Guam or down its Aircraft when threatened.

Some analysts and leaders, allies have questioned the decision of the Koreans to continue this “Dead End” path, despite isolation and sanctions imposed on her and economic hardship suffered by majority of its citizens. Understanding the view of both parties is crucial in finding a solution to the 21st century ‘Cuban missile crises-like’ event. History has taught a great lesson and the North Koreans won’t afford not to take from it. Although the US has achieved quite a significant success, internally and in foreign policy, it’s no doubt they have also procured a significant loss and also contributed to the instability in some regions. The invasion and military intervention of the Vietnam, Afghanistan, Iraq and Libya have had a significant condemnation from some countries, such as Russian, China, Iran etc. Its actions have resulted to North Korea seeking a deterrent in the face of any threat to their existence.The believe that being a nuclear power with the capability of striking the US will subject the US to a second thought before taking provocative actions against her. She have invested massively in her nuclear and missile program, with 25% of her GDP amounting to $10 billion. This isvquite much but less than 5% and 20% annual budget of the US and the South Korean militaries respectively. The US won’t tolerate a “Rogue Nation” according to her views the ability to lay hands on a Nuclear weapon and the capability to strike its coast. A reason she have drafted resolutions in sanctioning the North Korean regime. And also the US has shown clearly the they won’t compromise the security of her allies by withdrawing thousands of troops stationed in the South, a position strongly supported by her allies.

TO BE CONTINUED…. CHECK FOR PART 2 TOMORROW