The University of Ibadan has on Wednesday confirmed that Godwin Obaseki graduated from the university.

UI while reacting to a statement by the National Chairman of the All Progressives Congress, Adams Oshiomhole on Tuesday said that Obaseki finished from the institution in 1979.

In a statement issued by its Registrar, Olubunmi Faluyi, the premier university noted that the Edo State Governor graduated in 1979 with a Second Class Honours, Lower Division.

Faluyi in the statement entitled ” Godwin Obaseki Graduated from UI” noted that Mr Obaseki’s records of admission and graduation are intact in the archives of the University.

She said, “Mr Godwin Nogheghase Obaseki, the Governor of Edo State graduated from the University of Ibadan where he studied Classics.”

“Mr Obaseki gained admission to the University in 1976 and graduated in 1979 with a Second Class Honours, Lower Division.

“Records of his Admission and Graduation are intact in the archives of the University.

“Thank you,” the official said without providing further details. 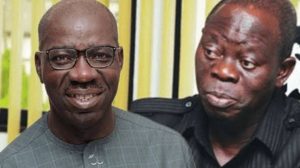 Oshiomhole during the inauguration of screening committee on Tuesday, joined critics of the governor to question his educational qualification.

“Someone should approach the UI and end this matter once and for all. If the certificate Obaseki parades is that of the UI, find out – how did he pass senate screening of those days? I’m aware that in those days when this man never dreamt of becoming a governor, every student, no matter your status or your family name, must pass screening.

“How come the UI allowed him then. Did he do a remedial? which was not unlikely. These are questions. Many (who) came in especially in education and linguistics, did remedial for one year and if the result was good, gained direct entry and graduated three years after.”

The duo of Oshiomhole and Obaseki are at daggers over the second term ambition of the governor. Obaseki is seeking the ticket of the APC to run for another term, while Oshiomhole is supporting Pastor Osagie Ize-Iyamu.