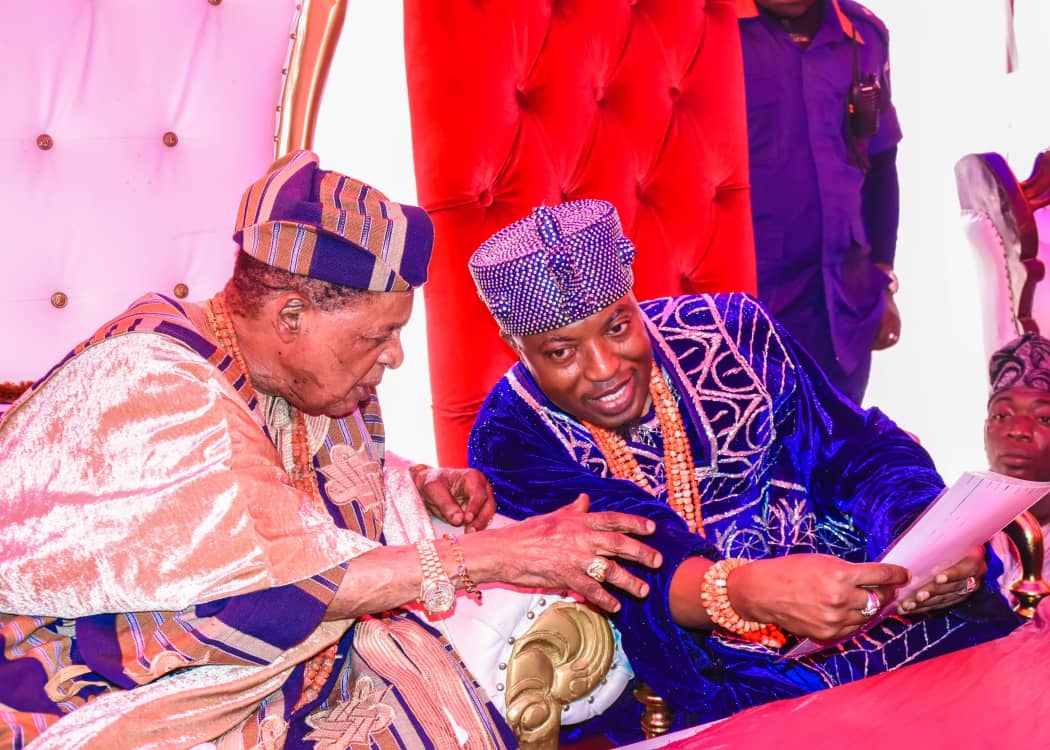 Oba Akanbi condemned the disunity in Yoruba traditional Institution, calling on the Alaafin to engineer process of reunification to the advantage of our rich respected heritage in the world map.

He described Alaafin as a foremost traditional rulers not only in Yorubaland but also in Nigeria, saying his words and actions are needed at this critical time of unity challenge in the institution.

Alaafin, Oba Lamidi Adeyemi, in his reaction, affirmed disunity in Yoruba traditional council was invited by political infiltration into the ranking of the council by politicians of the old Oyo Empire, as he assured Oluwo to handle the assignment with all his utmost traditional strength.

He further disclosed Iwo as the supposed seat of Osun State capital should traditional, political and cultural sagacity be considered while carving out Osun out of Oyo .

Oba Lamidi related his relationship with Iwo as cordial and always symbiotic, saying his visit will further cement the affinity between the two ancient city.

He commended Oluwo for his tenacity despite numerous distractions, saying his first 20years on as Alaafin was turbulent and rough, even than Oluwo’s case.

“Yoruba traditional institution is porous, one without unity and lacking the strength to protect and secure Yorubaland. It is disheartening there was no formidable central council of Obas to issue statement of appeal and command where necessary most especially as it relates to the recent destruction that accompanied the recent EndSARS Protest in the South Western Nigeria”

“Our unity is not only strength but also greenlight to the security, protective and progressive hope of Yorubaland and her generations. I want to charge and appeal to the respected Alaafin of Oyo to use his traditional paraphernalia and stronghold to bring out olive branch branch and unite actors in the council”

“Baba Alaafin, I appreciate your visit, it is a gesture that must be reciprocated. Your worth is unquantifiable. I’m ready to complement your efforts at fashioning a new map for the progress of Yorubaland”

Alaafin was quoted as saying “Iwo is an ancient city with cordial and understandable relationship with Oyo. I’m not new to Iwo. I visit occassionally. Iwo is rich in culture, tradition and religious. Ordinarily, Iwo should have be the capital of Osun State following their traditional, political and religious sagacity”

“The bridge of peace in Yourbaland was affected through the infiltration of politicking into the Institution by politicians of the old Oyo Empire. The challenge from every quarter as it equally comes from Oluwo is a challenge to rise to that occassion and do the much needful without retraction”

“I commend Oluwo for his courage, tenacity and zeal in standing tall despite enormous distractions stage managed by his few subjects. I had tougher experience in the first 20years of my reign, cry rough and turbulent. It is what Yoruba will call “Ojumo kan, ogun kan- one day, one war”

“I’m pleased to visit Oluwo again, felt at home and give him words of encouragement in shaping new course of hope for the Yoruba race”

Joining Oluwo to receive Alaafin were : The Aagberi of Iragberi, Akire of Ikire Ile, Adatan of Asa, The Waziri of Yorubaland, Chief Imam of Iwoland, Prof. Lai Olurode, Queen Iyabo Lamuye and many dignitaries cutting across traditional, religious and academic circles.