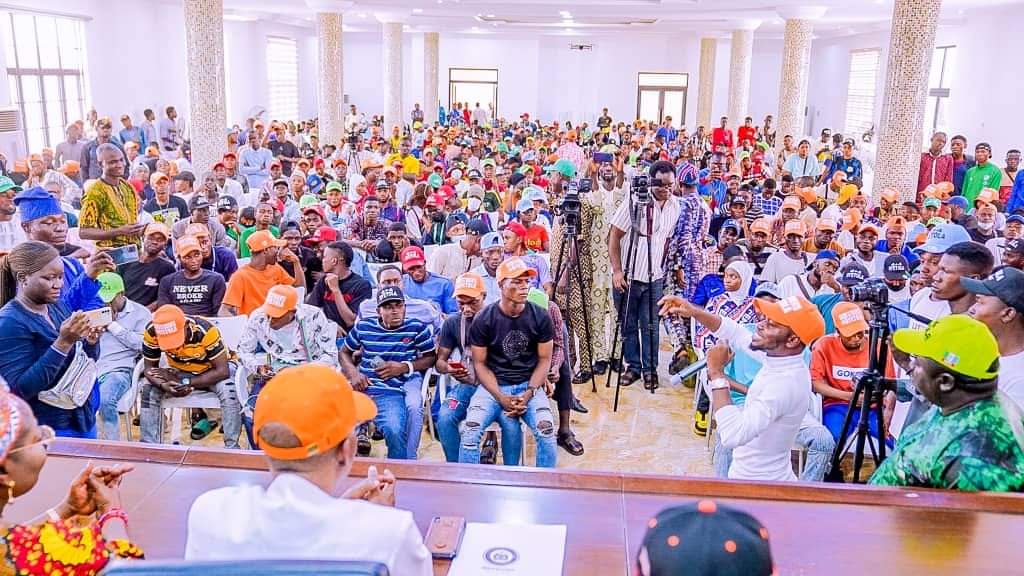 The obviously ecstatic students who had earlier embarked on a solidarity walk from Olaiya junction through Aregbe area to Ogo-Oluwa, said their endorsement was informed by the outstanding performance of the Governor in the past three and a half years.

The students said they can no longer be neutral in the face of physical realities of competence, capacity and experience of Governor Oyetola.

Speaking, the National President, National Association of Osun State Students (NAOSS), Comrade Yusuf Moshood Agboola, said the Governor had distinguished himself as a committed and transparent leader whose modest achievements was unprecedented in the history of Osun.

“We are not here for a political jamboree. We are formidable, resilient and highly-principled students of the State who believe strongly in good governance and responsible leadership.

“We are here on a strong conviction of good governance and quality leadership as being demonstrated and provided by Governor Oyetola to redefine the socioeconomic fortune of our dear State.

“Our endorsement of the Governor is not in anyway being induced by anything other than empirical facts and figures we have gathered and attested to since his emergence in the past three and a half years.

“We have no choice but to support this government and ensure that the governor is returned for a second term because he has done excellently well in all ramifications, particularly in the areas of education.

“We are convinced by many of your achievements, most importantly your prompt intervention in the education sector. You have proved to us that you are a leader with listening ears as manifested in the approval of many of our demands.

“I recall that all our nine demands put before you were approved and this had led to the improved welfare of students across the State, particularly your gracious approval of our bursary, mobility vehicles, prompt payment of lecturers and non-teaching staffers across the tertiary institutions as well as your positive disposition to non-increment of the tuition fees.

“We are indeed solidly behind you and your government and we are ready to mobilise massively to ensure your return. We have over 20,000 students as at last count that have been captured on our data and they are all ready to vote and canvass for you come July 16 governorship election in the State”, he added.

Also, National President, NANS/JCC, Comrade Oyelayo Afeez Oyewole, lauded the Governor for running a student-friendly administration, saying his outstanding performance had endeared them to him.

“Just few months ago, the students union leadership was able to meet Mr. Governor where we laid down some of the challenges confronting us and to the glory of God, today, all the challenges have been resolved.

“We laid down nine problems and they have solved them and that is what prompted us to deem it necessary to reciprocate the gesture by ensuring that he is returned. He has successfully provided vehicles for us across campuses. He has heeded our call not to increase tuition fees and he has been paying salaries and allowances of our lecturers regularly. That is why we have not for one day gone on strike.

“He has also fulfilled his promise to ensure prompt payment of our bursary in all the 30 local government areas, including Ife-East area office, and our request to ensure that some of the roads leading to our campuses are tarred has also been fulfilled to a large extent”, he added.

In his response, Governor Adegboyega Oyetola thanked the students for their continued support and cooperation since the inception of his administration, noting that their high level of maturity and understanding had culminated in the success recorded in the tertiary education sector.

Oyetola who promised better days ahead extolled the students for the appreciation of the modest achievements that God had helped him to accomplish within the three and a half years of his administration, saying they have just seen a tip of the iceberg of what he has in stock for them.

“I must commend you for your maturity and high sense of understanding, which had earned us the smooth running of academic sessions all through without a single moment of strike. I can claim today that no lecturer can say he is not receiving his or her salary in full as and when due.

“We have equally done so many things to ensure an improved welfare of workers in all our tertiary institutions and I can assure that the second term will be better than the first term as we are committed to take our state to enviable heights.

“You are an enlightened segment of the population and there is no doubt in the fact that you understand what education means. You can’t afford to entrust your lives int the hands of someone that can not be trusted. I am fully prepared for the job and I am highly educated. I have spent over 30 years of my life in the private sector and I have received several awards from reputable institutions. We can’t afford to experiment with our lives. Your vote is to ensure continuity of what we are doing. Your vote is for progress. We have improved your campuses than what we met.

“Please get your PVCs and don’t be deceived by the penchant for little money. Face your future and your career and together we shall coast to victory”, Oyetola added.

Addressing journalists, the Senior Special Assistant to the Governor on Students Affairs and Social Mobilisation, Comrade Kehinde Ayantunji, commended the students for being resolute and for standing by the truth in the face of physical realities.

“You can see that the entire students structures in Osun came out massively to endorse Governor Adegboyega Oyetola for a second term, having critically and painstakingly assessed his remarkable performance in the last three and a half years. They have confirmed that they endorsed the Governor based on his outstanding performance. You can see that they were convinced by the responsible leadership provided by the Governor in education, workers’ welfare, security and his love for the students.

“One of the strong points they made was that at this crucial moment, they cannot be neutral as they need to align with a government that has prospect for their welfare. That is why they have been out in large number since morning to reciprocate the good gesture of Mr Governor.

“The amazing part of this is that majority of them, if not all, have their PVCs because they are enlightened population and they know the importance of PVCs and power to elect good leadership.

“Out of 1,955,657 registered voters in the State, youths between the age of 18 and 50 constitute 70 percent, and out of this 70 percent, 32 percent are students. The implication of this is that Mr. Governor stands to have block votes from the students”, Ayantunji said.