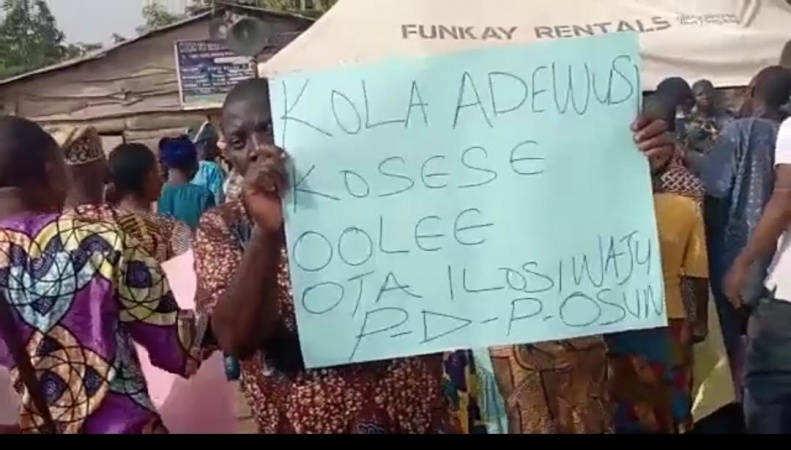 As the rumour continues to move round that Mr Kola Adewusi has been nominated as the running mate to Senator Ademola Adeleke, some members of the People’s Democratic Party (PDP) in Ile-Ife have protested against his choice.

The protesters who stormed streets of the ancient town on Friday, described Adewusi as a spoiler, who is unfit to be the party’s deputy governorship candidate.

The Protesters were armed with placards with several inscriptions all calling on the leadership of the party to rescind the decision.

When contacted by InsightMedia, the Director of Media of the Osun State PDP, Mr Oladele Bamiji, admitted that Adewusi’s name was muted but it has not been ratified by party leadership, stating that conversation is still ongoing on the matter.

He said the protest was part of democratic process and it remains right of party members who feel aggrieved on any decision. He however, said the party leadership will engage the members from Ile-Ife  before submitting the name to the Independent National Electoral Commission (INEC).

“As we speak, conversation is still ongoing. No final decision has been made for now. But I can confirm to you that his name was among those muted for the position.

“The protest is an eye opener for the party leadership to engage more. There should be more consultations and engagement with the people. People have to know. Ife is a traditional community. The party knows the voting pattern of the place.

“Though it is still a speculation because the name has not been submitted to INEC. But I know the party leadership will have a round table discussion with aggrieved members”, Bamiji said.