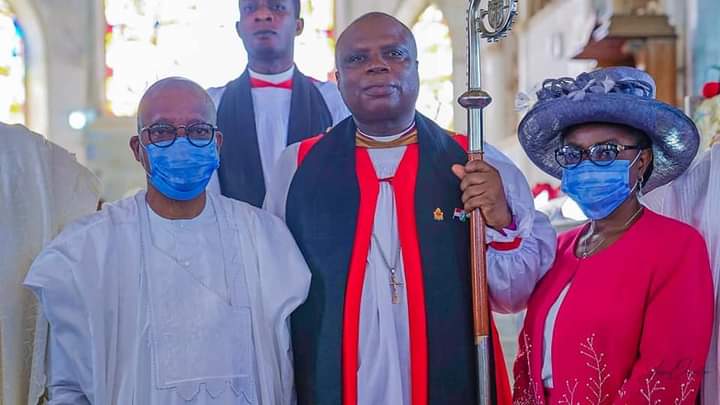 …No effort will be spared to ensure religious tolerance – Gov

The Diocesan Bishop, Diocese of Osun Anglican Communion, Rev. Foluso Olugbenga Babatunji, on Sunday called on the citizens and residents of the State to support the administration of Governor Gboyega Oyetola towards bringing more development to the State.

The Cleric also applauded the State Government for continuously prioritising the welfare and security of people of Osun.

He also lauded Governor Adegboyega Oyetola for his efforts at sustaining the peace of the State since the inception of his Administration, describing the efforts as unprecedented and worthwhile.

Babatunji therefore urged citizens and residents to continue to support the Administration in its avowed commitment to reposition the State.

The cleric said these on Sunday while delivering his sermon at the Thanksgiving Service to mark the celebration of the 30th anniversary of the creation of the State. The Service which held at the Anglican Cathedral, Balogun Agoro, Osogbo, was organised by the Osun Christian Community in collaboration with the State Government.

Rev. Babatunji attributed the successes Osun had recorded over the years to the avowed commitment of successive governments to build a virile State that citizens and residents would be proud of.

The Diocesan Bishop, who acknowledged the efforts of Governor Oyetola’s Administration in the areas of security and welfare of the people, said that it was worthy of note that Osun had sustained its status as the most peaceful State in Nigeria under the leadership of Oyetola.

He said: “As we mark the 30th anniversary of the creation of Osun, I have so many reasons to celebrate the State because since I have been in Osun, particularly Osogbo in the last two years, Osun has remained the most peaceful State. No crisis, no violence and no report of any form of insurgency or banditry.

“We must appreciate this because in spite the fact that we are not as rich as States like Lagos, Kano, Rivers among others, God has always been with us.

“Another reason to thank God is that we have the second highest number of higher institutions in Nigeria. Moreover, the database of Human Data Lab ranked us second highest educationally developed State in Nigeria. This is another landmark achievement in the history of this State.

“Also, we thank God that our State is a centre of political and religious development in Nigeria. Osun is known as the home of culture, tradition and customs. Osun is even the cradle of Yoruba race and by extension the human race.

“These among others are worth celebrating. I can say it categorically that since I have been serving God across the country, Osun is the most peaceful State I have been to in my life. This is a State where there is no violence, crisis or disorderliness whatsoever.

“When I was coming to the State about two years ago, I took my two dogs along in view of my experience where I was coming from. But getting to Osun, I discovered that the State is too peaceful to the extent that the efforts of having dogs was not been necessary.

“Also, when some people visited me and saw the dogs, I told them that I had to secure myself because I knew what I experienced where I was before coming to the State because I was coming from a State where about three times armed robbers came to our house.

“But since I got to Osun, I have never experienced such or heard such happen to someone. This is a landmark achievement as this success could be attributed to the efforts of the government at keeping the State safe for all and sundry.

He called on Osun people to join hands with government to continue to build a virile and healthy economy that would permanently place Osun on the path of socioeconomic, infrastructural and political sustainability and prosperity.

In his remark, Governor Oyetola reassured that no effort would be spared to ensure continued religious tolerance, peace and harmony.

Oyetola appealed to the citizens and residents of the State to continue to embrace religious tolerance which has been the fundamental objective of the Administration.

He called on them to continue to allow the spirit of religious tolerance to reign, saying this would enable the government to deliver services and further grant the State recognition as an outstanding peaceful State in the country.

Governor Oyetola who attributed the gains recorded since the creation of the State to atmosphere of peace that has been reigning between and among the notable faiths said, “the people have been critical partners in our journey and in our achievements as a State, giving support, offering prayers and sacrifices during good and challenging times.

“They have been with our government from the beginning, supporting us all the way, contributing to the peace and security architecture of the State and its socioeconomic development.

“We owe a debt of gratitude to the leadership and members of the Osun Christian Association of Nigeria in general and the Anglican Cathedral, Balogun Agoro, Osogbo, for their unflinching support and sacrifice, and contributions to the progress of our State and our government.

“Our Administration is committed to rendering services and making life better for the people. We shall continue to create a peaceful atmosphere for people to live in, carry out their businesses and practise their religion without let or hindrance

“All the extant faiths in the State constitute its strength and their peaceful coexistence has given us the enablement to deliver services and granted the State recognition as an outstanding peaceful State. Let us continue to allow the spirit of religious tolerance to reign in our State.

“God has been gracious to us as a State. He has blessed us with human and material resources and peace. Let us continue to appreciate God by using these resources to His glory and our collective benefit.

“I implore you all to continue to support government so that our State shall continue on the path of sustainable development. Let us make thanksgiving our way of life so that we can daily attract God’s blessings,” he added. 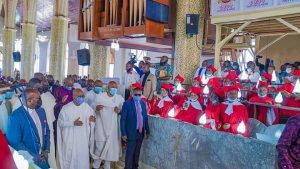 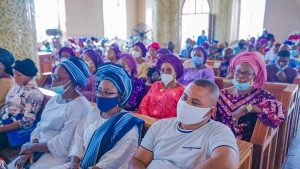 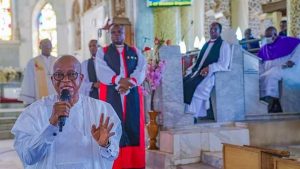 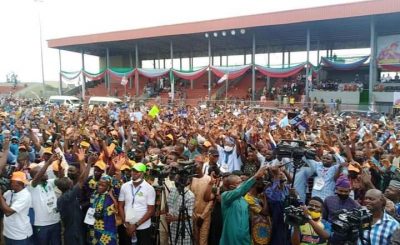 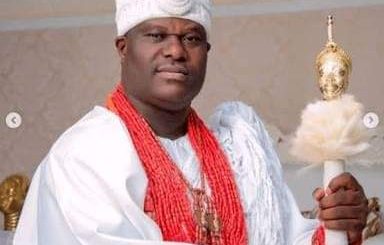