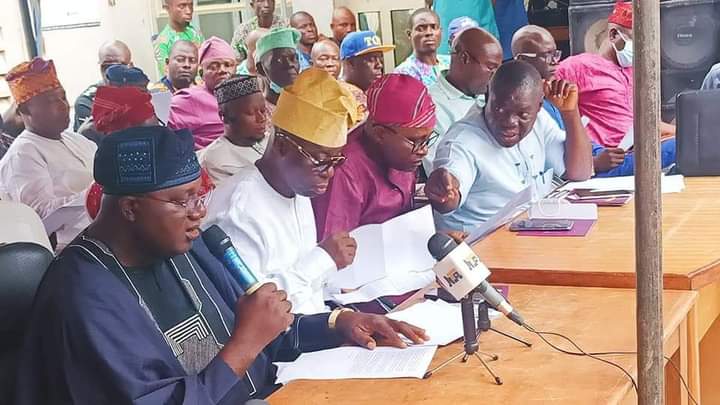 The Osun Progressives (TOP) has said the ward congress appeal committee members were nominees of Governor Gboyega Oyetola, stating that it’s not surprised about the report submitted to the Caretaker/Extraordinary Convention Planning Committee of the party.

Chairman of TOP, Reverend Adelowo Adebiyi said this in a statement he issued on Friday, a copy of which was obtained by InsightMedia in Osogbo.

InsightMedia has reported that the appeal committee led by Ambassador Obed Wadzani has dismissed the petitions of the Rauf Aregbesola group, recommending sanction for Adebiyi for forging signatures of party members.

TOP said even though, it doubts the report, but its members are both surprised because of the experience they had with Hon. Gbenga Elegbeleye-led congress committee.

READ ALSO: Osun APC: We still have confidence in the committee to do justice – Aregbesola’s group

Adebiyi said, “We note with dismay the absence of logic in the said report which is being circulated on social media. However, we believe there is no smoke without fire, and human being are unpredictable.

“Should the said report be eventually true, we will not be surprised because of our experience with the Hon. Gbenga Elegbeleye Congress committee.

“We say with all sense of responsibility that we will not be surprised because the Appeal Committee might also carry out the shady job for who procured it like that of Elegbeleye committee.

“All members of the two committees were nominees of Governor Gboyega Oyetola as the representative of the South West in the National Caretaker and Extraordinary Convention Planning Committee.

“As Oyetola’s nominees, we are not in any doubt that they will do his bidding and ensure that his interest is fully protected.

“In real terms, rather than expect them to be fair and just, TOP busied itself with carrying out the process and procedures dutifully as stated by the National Secretariat of the party.

We were engaged in the path of righteousness because we are of the opinion that truth will always triumph in the face of lies and tyranny, no matter how long it takes.

“We are also of the view that our party, the APC will not allow injustice to take root in its operations as we will continue to explore all means by which no member is shortchanged to the extent of working against the interests of the party.

“If we are to address the said report which authenticity is still in doubt, we will conclude that the committee lied that we submitted only 32 petitions whereas this farther from the truth. Indeed, we submitted petitions in 286 wards aside the two submitted by Reverend Adelowo Adebiyi and Alhaji Rasaq Salinsile.”

The group called on the CECPC not to accept the results, adding that it will pursue its case to a reasonable conclusion.

“Indeed, we call on the National Caretaker and Extraordinary Convention Planning Committee to refuse the subjudiced report and preclude our governor from further participation in its activities as he has compromised his integrity.

“Even when we intend to formally pursue our case to logical and justifiable conclusions, we will never give in to repressive tendencies presently exhibited by the government and its people in the state.”