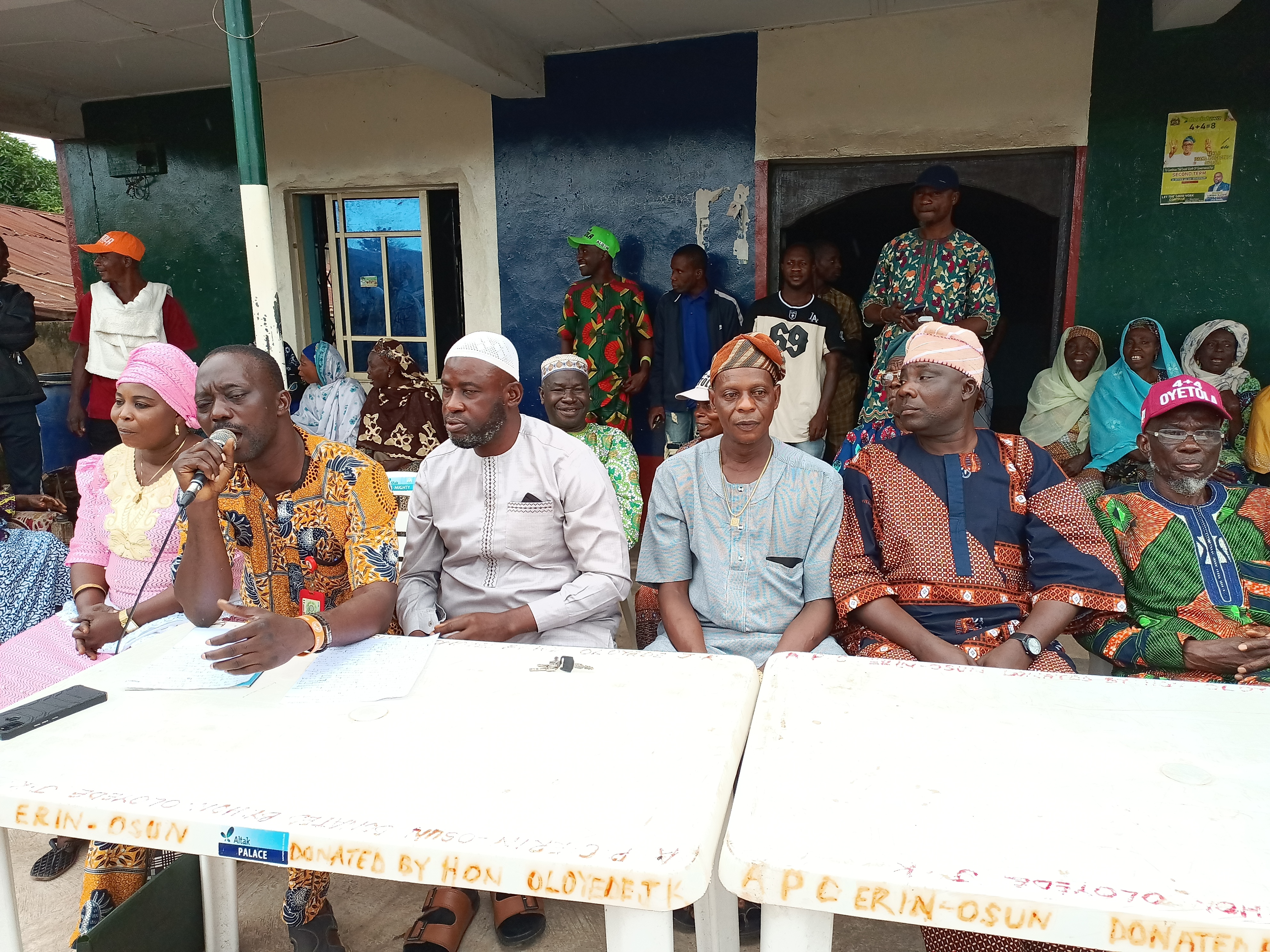 Leaders and members of the All Progressives Congress in Erin-Osun, Irepodun South local council development authority have insisted that the current Caretaker Chairman, Jimoh Adekunle Oloyede should continue as the Chairman of the council.

The party faithful on Friday trooped to the Party secretariat to express their solidarity with Oloyede, while they described the Thursday’s protest by some youth in the town as self-serving and an attempt to mislead the public.

Speaking on behalf of the party executives and members, the APC Chairman in Irepodun South LCDA, Hon. Mudashiru Anisere, said the party was resolute to resist any action capable of undermining and truncating the peaceful atmosphere reigning in their domain.

Hon. Anisere who frowned at the protest staged by a session of the party noted that those that were involved in the protest were not known to the party as their action was being sponsored by members of the opposition to destabilize the ruling party.

He called on members of the public particularly loyalists of the APC in Irepodun South LCDA to disregard the protesters and their self-serving claims calculated to drag the soaring image of the party and accused personality into the mud.

The APC Chairman Irepodun South LCDA, however appealed to leaders and members of the party to recommit themselves to the ideology and ideals of the party just as he urged them to give their maximum support as the local government election approaches.

“Whatever anyone does that goes against the party, he or she is on his own. We didn’t send anybody to protest. Anyone who feels he or she is capable can contest as long as he or she is a member of the party, there is right to vote and to be voted for.

“We want members of the public to disregard in its entirety the protest as none of the leadership of the party is in the know of such. We remain resolute to promote and promulgate our party ideology and ideals and anything short of that, is not our making”, he added.

InsightMedia also gathered that the party leaders had earlier written to the State APC Chairman, Prince Gboyega Famodun to express their confidence in the candidature of Oloyede as the council chairman.

The letter sighted by InsightMedia which was signed by Party leaders reads, “We the members of the stakeholders of Irepodun South LCDA, Erin-Osun at our meeting held on 6th September, 2022 unanimously resolved and nominate Hon. Oloyede Kamal Adekunle as our sole candidate for the chairmanship under the platform of APC in the forthcoming local Government Election slated for October 15, 2022, based on the under listed cathedrals.

“That Irepodun south LCDA Erin-Osun consists of five (5) INEC political wards i.e. Ward 07, Ward 08, Ward 09, Ward 10, and Ward 11. And Ward 07 has only one LGEA appointee member, Ward 08 has one LGEA appointee member and secretary to local government, Ward 09 has one State cabinet.i.e. Special adviser on Environment and sanitation to the Governor and Vice Chairman of local government, Ward 10 has only Chairman and lastly Ward 11 has LGEA Chairman appointee and APC local Government Party Chairman.

“That he, HON.OLOYEDE KAMAL ADEKUNLE is the only principal political office appointee that come from ward 10 Elerin D and won his polling unit with 216 votes to 111 to defeat PDP and maintained first position in the polling unit results of all 56 polling units that makes up the entre Irepodun South LCDA Erin Osun and he also won his ward with wide margins to defeat opposition PDP, INEC ward result attached.

“That all others political appointees like State cabinet member, Local government Education Authorities chairman and members, ex-State Assembly members From Ward 07, 08, 09 and 11 respectively, lost their various ward to the opposition PDP party in just concluded Governorship Election. Despite the fact that they has minimum of 2 political appointees per their ward. That we also consider geographical zoning of political office to maintain, equity and justice per each ward.

“That its only chairmanship position was given to the ward 10 Elerin D, before while others wards has political appointees range from 2 to 3, so the position need to be stationed back there to avoid unbalancing in political positioning.

That our nomination was based on the absolute loyalty, experience and his grassroot political stand with our great party APC as can be attested by your office. We believe the above cathedral will assist your good office in taking right decision.”