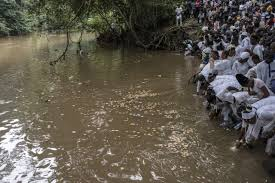 Worshippers of the Osun deity were on Friday sighted drinking from the Osun River despite warnings from the Osun State Government that the water had been contaminated by activities of artisan miners in the state.

As the Osun-Osogbo festival comes to a climax on today, August 12, thousands of Osun devotees and visitors had converged on the Osun grove.

INSIGHT MEDIA gathered that many of them were seen fetching water from the river in different containers and also drinking the water on their way out of the grove.

Devotees and visitors, who had trooped out to the riverside in their white attires and beads, were seen singing and dancing to traditional songs.

The Osun State Commissioner for Health, Rafiu Isamotu, who spoke with the pressman said “public health officials would be at the grove during the festival to further sensitise people on the dangers of drinking the water.

24 hours after taking a new bride, the Ooni of Ife reportedly conclude plans to take another one