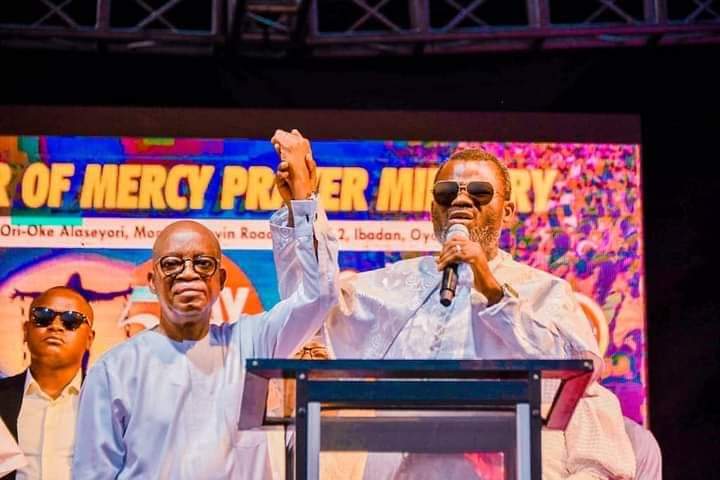 The efforts of the administration of Governor Adegboyega Oyetola of Osun in maintaining and sustaining the tempo of peaceful co-existence, religious harmony, social tranquility, security of lives and property of the citizens have received commendation.

The founder, Hour of Mercy Prayer Ministry Worldwide of the Cherubim and Seraphim, Prophet Moses Muideen Kasali, lauded the Governor for prioritising the security and general well-being of the people of the State.

The clergyman who attributed the reign of peace in the State to the noble character and meek nature of the Governor, expressed satisfaction with the manner the State has been governed under his watch.

This is even as the Governor sought for the continued support and prayers of the citizens in his efforts to continually build a peaceful, stable and prosperous state.

Prophet Kasali gave the commendation while delivering his homily at the grand finale of the 5-day crusade tagged ‘Help from Above’, at the Nelson Mandela Freedom Park, Osogbo.

The cleric noted that the purpose of the crusade in Osun was to further seek the face of God for continuous peace, unity and stability of the State, noting that Osun had distinguished itself among its peers in the area of security and peaceful co-existence.

“It is incumbent on us all to walk in the Lord and pray vehemently for the peace of our souls, peace of our communities, cities and state as a whole. We must do everything to ensure the continuity of peaceful co-existence reigning in the state.

“As we all know, nothing important can be achieved in a chaotic atmosphere, hence the need for us all to be more prayerful for the sustainability of the existing peace in our State. That is the reason we have come to pray and bless the state”, he added.

Addressing the congregation, Governor Adegboyega Oyetola, implored residents of the State to continue to be law-abiding in their daily conducts in the interest of peace and stability of the State.

Oyetola who was accompanied by his wife, Alhaja Kafayat Oyetola; his Deputy, Benedict Alabi; Secretary to the State Government, Prince Wole Oyebamiji; APC State Chairman, Prince Gboyega Famodun, members of the State Executive Council, among other dignitaries said prayer has been the major pillar of all the successes recorded by his administration.

“We stand tall today in spite all challenges because of our strong belief in God and efficacy of prayers. God has been very merciful to us that is why we remain steadfast and resolute in our commitment to prayers.

“It is close to four years that we have been steering the ship of the state, and we thank God that He has not forsaken us but rather stood by us and guide us through that is why our State has remained peaceful.

“I must thank our people for their continued support and prayers and I urge you not to relent,” he added.