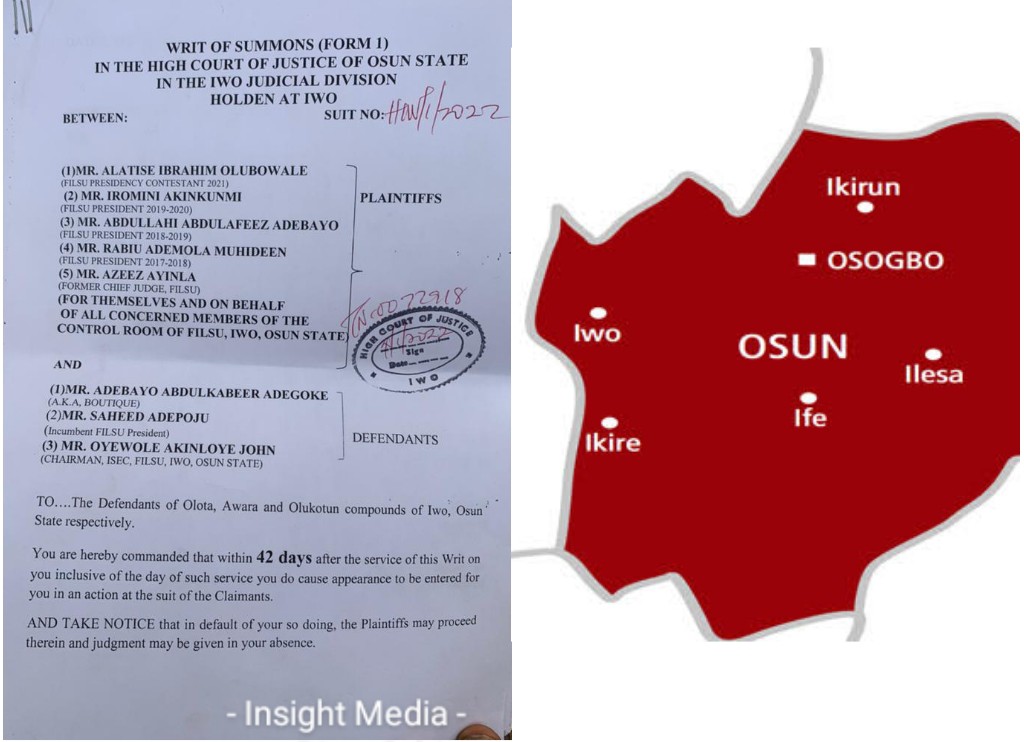 Alatise in court process filed by his lawyer, U. O. Alabi, told the court that the election held on December 31st, 2021 should be declared null and void, while a sum of N3m be paid to him and his co-plaintiffs.

The 21-paragraph allegations partly reads, “The 1st Defendant was a contestant in the purported FILSU election of 31” day of December, 2021 and the favored candidate of the 2nd Defendant who was supposed to be impartial, neutral and fair in the discharge of his statutory duties.

“The 2nd Defendant is the incumbent President of FILSU and the validly recognized holder of the office up till moment while the 3rd Defendant is the Chairman of Independent Students Electoral Commission (ISEC) under whose watch the Filsu so-called election of 31” day of December, 2021 was purportedly conducted.

“Plaintiffs aver that on the 31” day of December, 2021, general election was conducted into all offices of FILSU. Plaintiffs aver that 500 ballot papers were printed by the electoral commission chairmaned by the 3rd Defendant, 259 voters were accredited and 241 unused papers:

“Plaintiffs aver that upon counting of votes, 258 votes were recorded for all candidates of the CEC while a total number of 307 votes were counted and recorded for the office of the President which were from the same ballot papers as that of the other offices.

“Plaintiffs contend that the 31” day of December, 2021 election was marred by irregularities, malpractices and unfairness before and after election.

“In attempt at covering their shameful conduct, the 3rd Defendant and members of the electoral commission removed 29 votes for having been forged even though the ballot papers are the same and bore similar stamp to those ones certified not to be forged.”

“The 3rd Defendant further went ahead to remove 15 more votes because they were cast with blue or black pen as against the green pen the ISEC resolved and agreed to use.”

The Plaintiffs’ prayers before the court as as followings;

A declaration that the FILSU Election of 31″ day of December, 2021 conducted at the Olowo of Iwo Palace, Iwo, Osun State and by the Electoral Commission highhandedly chaired by the 3rd Defendant is null and void and of no effect whatsoever same having being conducted without recourse had to the provisions of Constitution of the Union body, fairness and equity.

An Order of this Honorable Court directed to the 3rd Defendant for a. fresh election which is to be duly supervised by stakeholders of the Student Union to ensure a free, fair and credible election.

An order of injunction restraining the 3rd Defendant from swearing-in, inaugurating or from carrying out any act which has the effect of giving validity to the emergence of the 1″ Defendant as the President of Filsu.

An order restraining the 1st Defendant from parading himself or conducting himself as to create the impression that he is the duly elected President of FILSU.