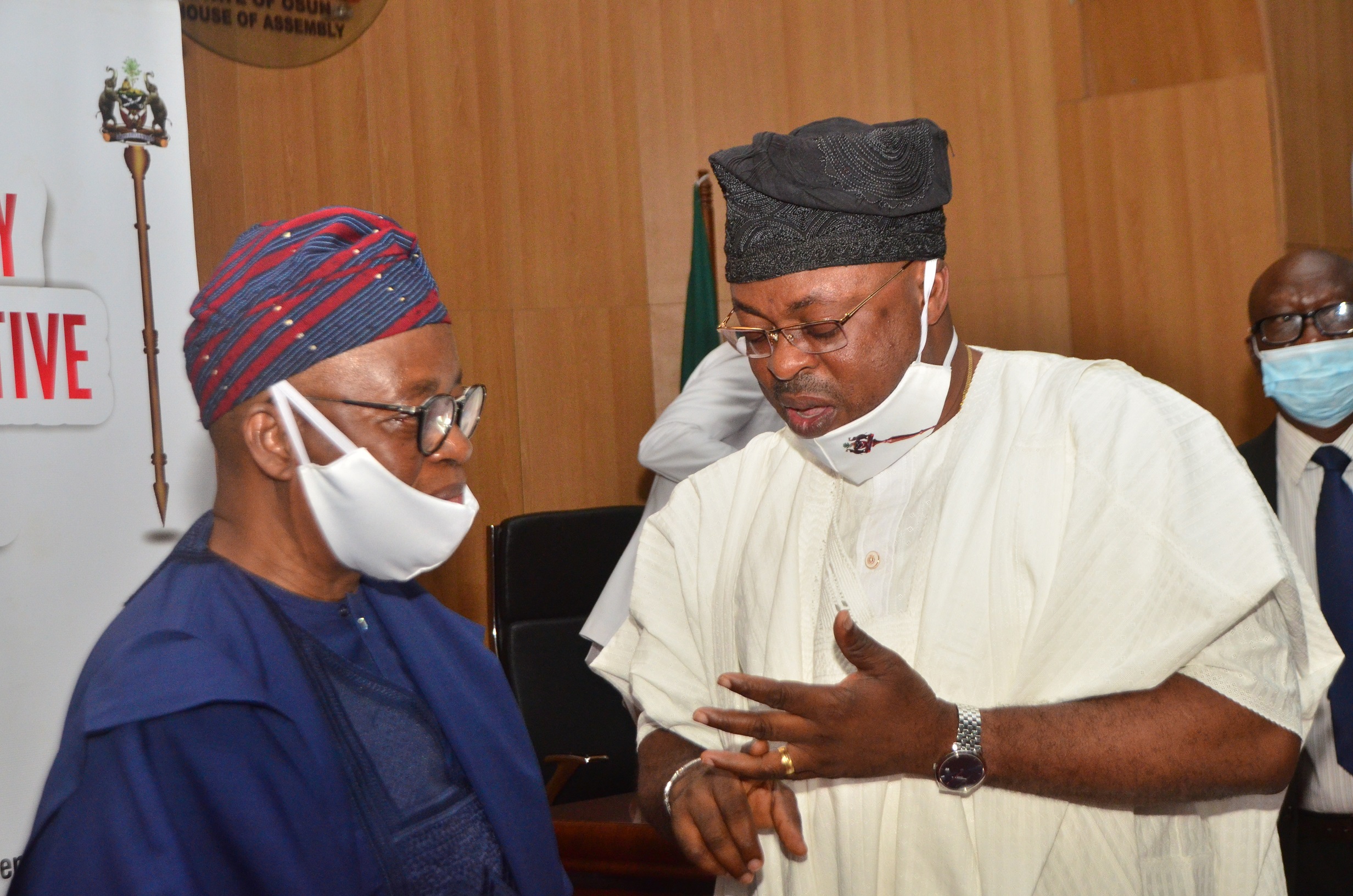 Speaker of the State of Osun House of Assembly, Rt Hon. Timothy Owoeye has said the parliament under him has so far worked for the interest of the people of the state in the last one year.

Owoeye, during a special plenary session to mark the 1st anniversary of the 7th Assembly held on Tuesday in Osogbo, said the legislature has passed eight bills into laws while many others are at the advanced states of legislation.

The speaker added that the parliament has been driven by the legislative agenda it set at the early in its life.

According to him, the 7th Assembly within one year carried out series of oversight functions on a number of ongoing development projects such as road construction/rehabilitation, construction/renovation of primary health care centres, llesha water construction projects and many others with a view to having value for money and ensuring transparency, accountability and probity in project execution.

“We also held interactive sessions with the Ministries, Departments and Agencies (MDAS of government as well as tertiary Institutions where series of issues and challenges facing these agencies and institutions were highlighted and discussed.

In the area of accountability and openness of the house, Owoeye said the house has been digitalized in order to earn citizens’ trust.

“We have published our first session achievements in a publication that will be made available to the general public. We’ve also held over ten media appearances to make ourselves accountable to those who sent us here, the people.

The Assembly now has a functional e-parliament platform, www.hoa.os.gov.ng where everything regarding the activities of the House can be accessed from wherever you are We are done with the test-running, we’ve received feedback and now making sure reflects the other wishes of our people. I’m also sure you’ve noticed my increased presence and engagement on Twitter and other social networking platforms, we will not stop.”

He commended the medial personnel who have been at the forefronts of the battle against COVID-19, stating that their effort is well appreciated.

The speaker also added that the Assembly is considering a stimulus bills that will greatly assist the people and better the economy, we are going to work with the Executive and critical stakeholders to make sure that the bill covers all critical areas of a post-covid economy.

In his address, Governor Gboyega Oyetola commended that achievements of the assembly under Owoeye in the past one year.

He commended the leadership and members of the state House of Assembly for demonstrating high sense of patriotism, forthrightness and commitment since its inauguration.

Oyetola who described the House as a critical partner of government in its resolve to lift Osun out of economic dire straits with its support for the Osun’s Economic and Investment Summit, said his administration admires the monumental achievements and people-oriented legislation the House had delivered in the last one year.

He said “From its inauguration to today, the 7th Assembly has left no one in doubt about its focus and vision: rendering selfless and stellar services to the people. Our state admires the monumental achievements and people-oriented legislation this noble House has delivered in the last one year.

“The Executive has enjoyed robust relationship with this Honourable Assembly with neither arm compromising its role, integrity and independence. As a government, we owe the successful delivery of our Development Agenda, which is our pact with the people, to the unalloyed cooperation of this Distinguished House and on behalf of the Executive, I thank the House for their tremendous cooperation”, he added.

Oyetola, who congratulated the members, maintained that it was worthy of note that the government and the people of Osun can say with confidence that the state’s legislature ranks as one of the most peaceful, productive, creative and most people-oriented House in the nation.

He said: “I bring hearty congratulations from the other two arms of government and the good people of Osun state to the leadership and members of this distinguished House of Assembly on this auspicious occasion of its first year anniversary.

“In particular, I want to appreciate the House for its understanding during these hard times, especially during the raging Coronavirus pandemic. Apart from institutional support, the members of the House demonstrated a huge sense of responsibility by distributing palliatives to the poor and the needy across the state.

“The huge support that we enjoyed from the House in the past one year that has seen us achieving modest milestones despite sore economic downturn is a pointer to the success that lies ahead of us as we prepare for post-Covid-19 uncertainties”.

Those in attendance at the event are: former Speakers of the state House of Assembly; Barrister Wale Afolabi, Prof. Mojeed Alabi, Barrister Adejare Bello and Dr. Najeem Salam; members of the State Executive Council, top government functionaries, political stalwarts among others.