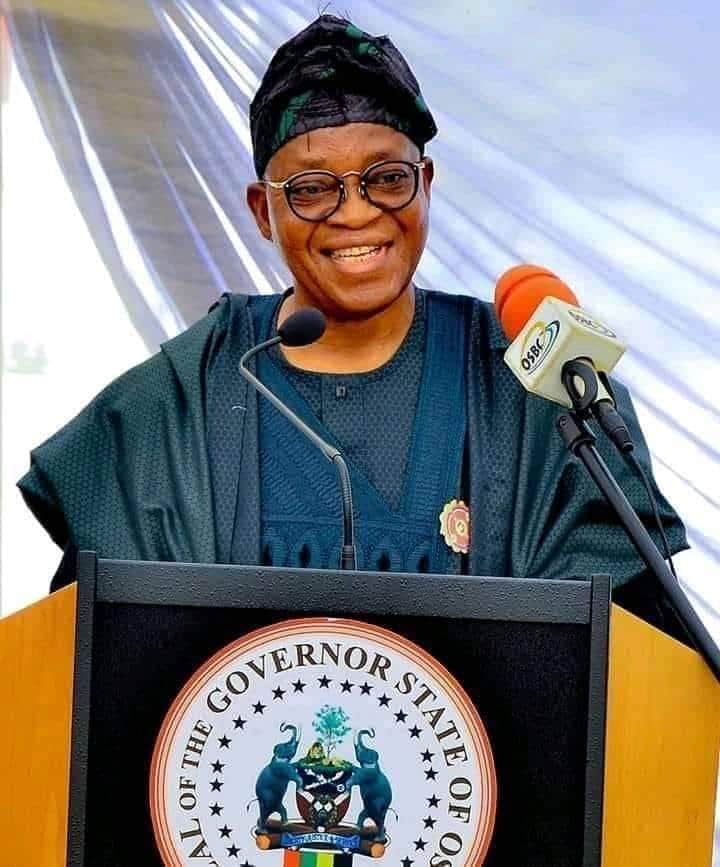 The Governor of the state of Osun, Mr Gboyega Oyetola on Thursday flagged off the Osun Ethanol Bio-Refinery Factory situated at Ayekale, along Egbeda-Iragbiji Road, Iragbiji, Boripe Local Government Area of the State.

Oyetola said that his administration will leave no stone unturned in its bid to stimulate the economy of the State through a robust and mutually-benefitting Public-Private-Partnership (PPP) as part of efforts to place the State on the path of socio-economic growth, development and sustainability.

He said the administration would go the whole hog to collaborate with partners and private investors to achieve the dream of making Osun the industrial hub of the Southwest.

The Governor reaffirmed the administration’s commitment to continually adopt creative means to deliver good road network, health facilities, good schools and other facilities as means for developing Osun and putting it on the path of greatness.

The Factory was part of the positive responses received by the government from members of the private sector, particularly local and foreign investors who had earlier been wooed during the Osun Economic and Investment Summit held late last year.

When completed, the Osun Ethanol Bio-Refinery Factory will be operating on over 21 hectares of land conceded to it as equity, and on full operation, it is estimated that it will attract about USD70m to the State and generate 10,000 jobs.

The product, ethanol, is one of the safe energy sources the world is turning to as a measure of preventing global warming. It would be converting cassava to ethanol, thus empowering thousands of persons in the chain of planting, harvesting, transporting and processing cassava to ethanol and marketing a final product that is hot in today’s world pharmaceutical and energy market.

Laying the foundation of the factory, Oyetola said his adminstration was poised to deliver the benefits of democracy to all and sundry and provide an enabling environment for private concerns to establish industries in the State.

He expressed confidence in the ability of the factory to complement the government’s efforts at resuscitating the ailing economy of the State and deliver prosperity to the people.

“Today is an important day in the life of our administration and the annals of this State as it marks the groundbreaking of another project harvested from the Osun Economic and Investment Summit which was convoked in November last year to reposition the economy of the State and deliver prosperity to the people.

“Coming shortly after the harsh economic realities occasioned by the Coronavirus pandemic, this flag-off is an indication that our strategy for the delivery of economic prosperity has begun to yield good returns and a sign of the good things to come. We have no doubt that Osun Ethanol Bio-Refinery Factory will open a window of investment opportunities for the State.

“As you all know, our administration is in a hurry to transform the state and deliver prosperity to our people. This determination informed the convocation of the Osun Economic and Investment Summit within one year of coming into office. At that Summit too, we promised to hit the ground running.

“We are happy to find a worthy ally in Osun Ethanol Bio-Refinery Factory. The Management submitted a proposal for the project we are flagging off today few weeks after the convocation of the economic summit”, Oyetola said.

He urged the citizens and residents to establish industries and facilitate projects capable of enhancing the socio-economic prospects of the State.

The Governor enjoined the citizens to continue to live in peace so that economic and infrastructure activities couod thrive.

In their separate remarks, the Commissioner for Environment and Sanitation, Hon. Sola Oladepo and his counterpart in the Ministry of Commerce, Cooperatives, Industries and Empowerment, Dr. Bode Olaonipekun, expressed confidence in the ability of the factory to liberate the State from abysmal economic gloom to enviable wealth.

Earlier, the Chairman of the SMEFUND, promoters of the project, Mr. Temitope Ologunoye commended the administration of Governor Oyetola for thinking outside the box to resuscitate the economy of the State through workable and realistic diversification.

He lauded the commitment of Governor Oyetola to reposition the economy of the State, particularly his avowed determination to industrialise the State.

Ologunoye, said the factory will be completed in the next 24 to 36 months with a production capacity of 7million litres of biofuel annually.