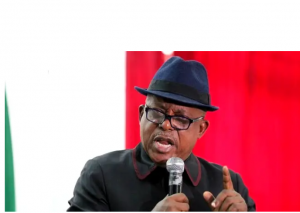 National chairman of the Peoples Democratic Party, PDP, Prince Uche Secondus, Thursday, counselled party organs to resist the temptation to do away with the current leadership of the party, noting that doing so portends ills for the party.

Secondus has had a week to forget, following persistent calls for his removal from several quarters, including some members of the National Working Committee, NWC.

Addressing members of the Board of Trustees, BoT, of the party at the Wadata Plaza national secretariat of the PDP yesterday, Secondus acknowledged that those picking holes with his management style are entitled to do so but pleaded that misunderstandings should be resolved internally.

He said: “Anything contrary to the smooth running of our party towards the remaining three months will not be good enough for our party. Any dislocation will cost an infraction that will result to several unknown issues that we may not be able to come out of.”

According to him, the past three years and eight months he has been in the saddle have been very peaceful, adding that the issues now rocking the party are not new.

In a veiled dig at his detractors, Secondus pointed out that forms for the various leadership positions will soon be on sale, saying, “after the main state congresses, both the public and our party were looking forward to a smooth and peaceful convention which is coming up in December. We believe the preparation is being done in the office of the National Organizing Secretary. Soon, the schedule of events, the timetable and other things shall be presented before the Caucus, BoT, NEC and all organs of our party for action leading to the convention.”

He lauded incumbent NWC, saying for the first time, leadership was provided without rancour until recently, even as he informed the party leaders that the seven national officers who earlier in the week tendered their resignations, have been attended to.

The PDP boss further called on leaders of the party to forge a united and formidable force to dislodge the ruling All Progressives Congress, APC, in the 2023 election cycle.

Meanwhile, chairman of the BoT, Senator Walid Jibrin has called on the leaders of the party to be guided by the crises which lead to the ouster of past chairmen, with a view to drawing sufficient lessons.

In his submission at the meeting, Walid bemoaned the current crisis, regretting that while Nigerians are earnestly looking up to the PDP to rescue the nation from the stranglehold of the ruling APC, the party itself is engulfed in needless squabbles. He called on members to unite ahead of the 2023 elections, saying, “in order to achieve complete success, we must do away with any personal interest and unnecessary in-house fighting aiming at killing the objectives set by the party.”

This is even as he urged the party to take a firm stand on discipline.

“Please, let us examine why many past national chairmen did not complete their tenure successfully- Chief Audu Ogbeh, Chief Okwesilieze Nwodo, Alh. Bamanga Tukur, Alh. Ahmed Mua’zu. Alh. Modu Sheriff and now the deputy national chairman, threatening to resign,” he added, assuring that the party will come of the current crisis stronger.