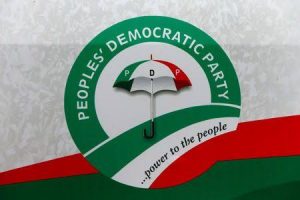 Atiku who stated this through his media adviser, Paul Ibe said he is only interested in peace and stability of the PDP, and not what will endanger the interest of the party.

“It is a beer parlour talk, it is also mischievous. Why will a former Vice President be behind the plot to sack PDP national chairman, Prince Uche Secondus? What will be his interest?

“This is someone who has commenced the process of having conversations with stakeholders of the party on reconciliation. A man who has encouraged processes aimed at ensuring peace and stability in the party.

“The trip he made to Port Harcourt came after a one in Delta. And he has more in the offing. Why will he promote peace and stability in the party and be behind moves to sack Secondus? It’s ridiculous for anyone to talk about this.

“Atiku understands the Constitution of the PDP and what the party says about tenure for party leadership. So he cannot be working against something that he understands and promotes. That is not how democrats behave. Those are anti-democratic behaviour and that is not who he is. Whoever is saying this, should know that this is a beer parlour talk and unnecessary mischief, ” Mr. Ibe said.

On what he is doing to help resolve the crisis threatening the soul of the party, Ibe said

“the crisis is related, we can not isolate one from the other. He recognizes that there are issues, like in every party administration. When you have more than two persons, people will have different positions. So, the important thing is how to resolve them. And he has commenced the movement to resolve the issues.

“Atiku is an individual, yes a major stakeholder in the party, and he has taken steps to bring everybody together to see how these issues can be peacefully resolved. They are all related, either the one that happens now or before. They are all part of the larger problem facing the party.”

Meanwhile, Secondus, Wednesday, met with the aggrieved deputy national officers who resigned their positions earlier in the week and appealed for calm.

The officers, who cited “bad treatment” exhibited by the party National Chairman, Prince Uche Secondus, since the election that brought the current leadership of the party to power in 2017, also alleged that there is a lack of financial transparency in the leadership.

Secondus appealed to the national officers to sheath their swords, adding that life of the National Working Committee, NWC, led by him will end in the next four months.

A source at the meeting, which was held at the party national secretariat, told our correspondent that some of the aggrieved members, promised to continue in office.

According to the source, Secondus told the aggrieved national officers that “we started together and there is the need to end together in peace.”

In their meeting on Tuesday night, Vanguard gathered that the NWC members, who met with party stakeholders and some Board of Trustees members, resolved to go back to their constituents to find ways of resolving the impasse.