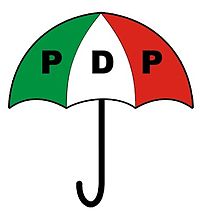 While responding to the committee, Professor Adeniran advised them to visit other aggrieved members of the party regardless of whether they contested or not. He also urged the Chairman, Prince Uche Secondus to reach out to a lots of members and bring them on board to work for the victory of the party.

He said: “We should try to interact with various players; I will suggest that we should not leave any stone unturned to reach out as much as possible. There are those of us who carried the flag, but there are some others who are key players in this party, who may not even contest for positions but they are no less concerned about this party.

“When you look back, you can see some of those key members of the concerned stakeholders who fought gallantly to ensure that indeed this party survived. So let the contacts, the consultations, be as all embracing as possible; it takes time, it takes energy but then what is worth doing, is what is worth doing well.”

The Professor of Political Science noted that Dickson assumed the position of the chief conciliator of the party not just because he is a governor but because of his passion and love for the party, his integrity and sense of fairness and justice.

“You said something earlier on that may be, what prompted you to lead this team is because you are a governor. I believe far much more than that; there are certain qualities that majority of us have come to appreciate in you ,which you should keep up.