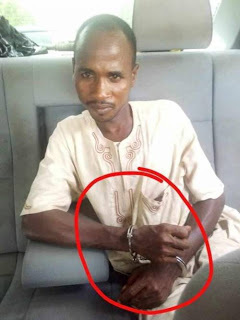 Police have arrested and charged to court a man, who identified himself as Usman Mohammed, for allegedly ‘insulting’ President Muhammadu Buhari and Governor Muhammadu Inuwa Yahaya of Gombe State.

Mohammed had appeared in a video that went viral on social media where he attacked President Buhari and Governor Yahaya. He also threatened to lead a team to attack the duo.

He said, “I swear to God, I am Usman Mohammed. I was born in Bambam, Balanga LGA Gombe State. O Allah, destroy Buhari and Inuwa Yahaya into pieces.

“If I can get one million persons like me, I will lead them to attack and deal with them. Go ahead and put it on the Internet, let them come and arrest me if they wish.”

Gombe State Police Public Relations Officer, Mary Malum, confirmed Mohammed’s arrest to SaharaReporters.
She said he has been charged to court for insulting and intimidating President Buhari and Governor Yahaya.

“The suspect has been charged to court for intentional insult and intimidation,” she said