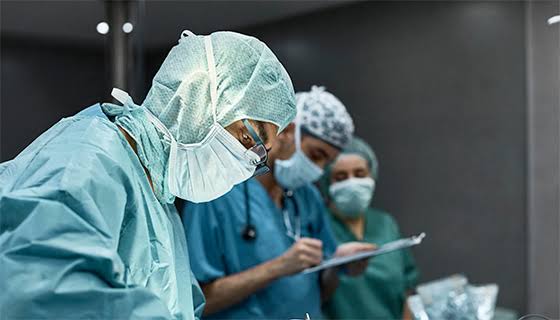 Sunday Samuel, a middle-aged man, has accused the Ondo State Trauma and Surgical Centre in Ondo Town of negligence after his wife died during a surgical procedure at the institution. Samuel blamed his wife’s death on the frequent power outage, claiming that hospital management restricts fuel used to run their generator.

Fola, the dead, was apparently diagnosed with breast cancer.

The mother of four was then placed on medicine for approximately a month in the hospital ward before being escorted to the operating room on Monday, July 25.

According to her husband, the operation was hampered by a power outage, as the medical facility alternated between using electricity and a generator.

He further complained that the hospital failed to supply a backup oxygen cylinder before beginning the surgery, and that none was accessible when they required it throughout the procedure.

“My wife got breast cancer and was brought to the Ondo State Trauma Centre, where she was stabilized for about a month,” Sunday explained.

“On Monday, July 25, she was taken from her ward and wheeled into the theatre room around 10.30 a.m. on a wheelchair.” Shortly after they moved in, the electricity went out, and they had to get the person in charge of the generator to turn it back on.

“I was startled that the man was simply pumping fuel into the generator.” After 30 minutes, the power was restored, and the generator was turned off.

“The light went out after an hour.” We started seeking for the man in charge of the generator at that point, but we couldn’t find him. As a result, I had to start the generator myself; imagine a large hospital like that.

“All of this was going on while the procedure was going on.” After about an hour, the person in charge of the generator switched back to normal electricity. One of the physicians hurried out about an hour and 30 minutes later to call someone in our presence to get oxygen.
“I was sitting directly across from the theatre with my mother-in-law and a friend and saw no one take the oxygen into the theatre.” They came out later to tell me that my wife did not survive. That’s when I burst into tears.” Sunday, a security guard, expressed his displeasure with the hospital’s decision to manage the gasoline in its generator at the risk of his wife’s life.

He added that all hospital demands were completed before Fola was transferred to the medical center.
“We bought oxygen the week before when she was still on the ward.” It wasn’t like she required oxygen, but they indicated she might in the middle of the night. So I paid for it, and they went to get it and put it by her side. She didn’t use it for more than five days. When I arrived the next morning, they told me she had been comatose all night and needed oxygen. We also purchased two pints of blood, one for before the surgery and one for during the procedure. So, if they required fuel, I would have gotten it as well, rather than rationing their fuel. I was perplexed as to why they should control fuel while performing surgery at the price of someone’s life. “My wife would have survived if those events had not occurred,” he stated.

A family member who witnessed the incident and identified himself as Tunde stated the deceased was improving before she was evaluated for surgery.

“When they brought her here, she could hardly walk,” he explained. She did, however, begin to recover. Some days before the surgery, she was walking, eating, and even going to the potty by herself. Her paperwork bears witness to this. A nurse even acknowledged to us that she was already improving and preparing for surgery, and that anything like this should not have happened.”

Tope Akinjide, the medical center’s information officer, stated that no operation was performed on Monday.

However, when challenged with evidence from our correspondent, he verified that the patient was operated on that day.

“I am interested in administrative problems, not clinical matters,” he explained. On Tuesdays, Wednesdays, and Thursdays, surgery is performed from my own workstation. Nonetheless, they could have scheduled it for Monday at their leisure. The surgery department has the authority to arrange their procedure. I just confirmed the case’s personality and main subject matter. It is correct.”

According to Akinjide, a leading surgeon at the hospital told him the patient’s chances of life were slim.

“The problem is that when I spoke with the top surgeon, he indicated the patient in question had been in the hospital for several weeks and was critical, a late presentation of the case.” The woman had breast cancer and needed blood transfusions. Furthermore, he stated that the patient’s oxygen was still intact, claiming that “it did not become exhausted overnight.”
However, Akinjide did not respond to charges that the hospital was switching between electricity and generator while the procedure was being performed.

He stated that he would contact the hospital’s Deputy Chief Medical Director for more information on the occurrence.

He had not done so as of the time this report was filed. (The PUNCH: Text, excluding headline)