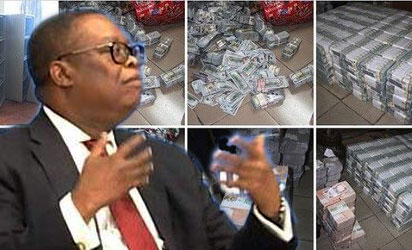 Trouble has arisen for the dismissed Director General o National Intelligence Agency, Amb. Ayo Oke as Economic and Financial Crimes Commission, EFCC, has summoned former him for further interrogation in relation to the $43.5 million locked in a private apartment in Ikoyi, Lagos.

Also summoned to appear before operatives of the EFCC for questioning is wife of the embattled former top spy, Folashade, who the agency said last night, had dodged previous invitations.

The anti-graft agency has also invited some unnamed persons said to be accessory to the cash for interrogation at its headquarters and it was learned that the summons are in preparation to arraigning the suspects in court.

A source in EFCC said last night: “In furtherance of its investigative activities to unravel the circumstances surrounding the $43.45 million cash recovered by operatives of EFCC in Lagos sometime in April 2017, the commission has invited former Director-General of NIA, Amb. Ayodele Oke, and his wife, Folashade.

According to a source, the NIA boss’ wife has never honour any invitation sent to her.

“Mrs. Oke had refused to honour previous invitations by the commission, which resumed its investigation into the matter, following the Federal Government’s decision to relieve Oke of his position as D-G.

“Beside the couple, other suspects are equally being invited to determine their culpability or otherwise in the humongous cash, in foreign currencies and naira notes, stashed in a residential building at Osborne Road, Ikoyi, Lagos.”

A competent source in the commission had told Vanguard, Tuesday  that the agency was set to dock Oke and other suspects involved in the Ikoyi cash haul any time from now.