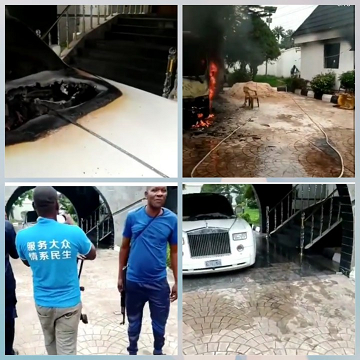 Facts have emerged on why gunmen numbering about 30 in the early hours of yesterday, Saturday, April 24, 2021, invaded the Omuma in Oru East Local Government Area country home of Imo State Governor, Senator Hope Uzodimma, and set it on fire. The gunmen also reportedly killed upwards of eight people both during the attack and as they retreated.

A report this morning by Sunday Sun quoted unnamed sources in Omuma village as disclosing that the attack followed the killing, earlier in the morning, an Indigenous people of Biafra (IPOB) Commander popularly known as Ikonso by a combined team of soldiers, the Inspector General of Police Intelligence Response Squad and Department of State Security (DSS).

According to security sources, after the fierce gun battle, the security team recovered the remains of Commander Ikonso and that of six of his fighters while several sophisticated weapons including six AK-47 rifles, hundreds of ammunition of different caliber and lots of charms, including bullet-proof charms were recovered from them.

The security operatives were also said to have destroyed the operational base and headquarters of the IPOB in the area.

Suday Sun quoted one source as saying: “Angered by the brazen invasion and destruction by the security operatives, a detachment of youths suspected to be members of the IPOB arrived at the community and marched straight to Mgbidi, Oru West LGA, where they confronted some security operatives.

“From Mgbidi, they marched to Omuma community and first of all set a police station there ablaze before matching to the governor’s house to attack it.”

“But the Imo Police Spokesman, Orlando Ikeokwu, insisted that no police station was set ablaze,” the report said.