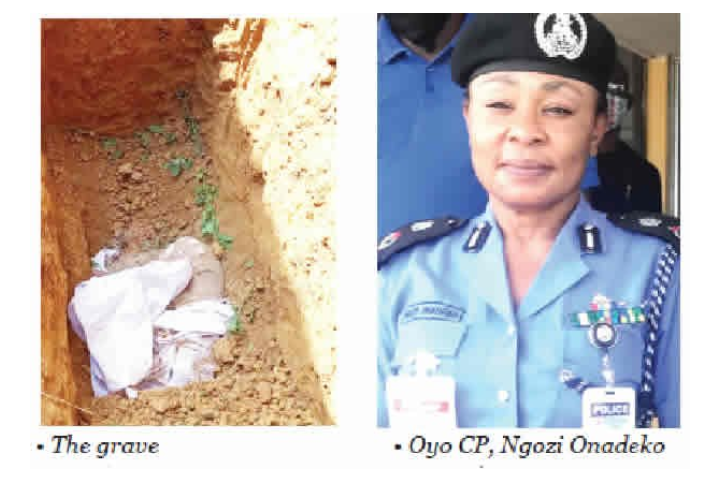 Newly-buried corpse of a 68-year-old man identified as Alhaji Kolawole Waheed was exhumed from the grave and vital parts of his being removed in the Idi-Arere community in Ibadan, Oyo State,

It was gathered that Waheed died last Thursday and was buried on Friday according to Islamic rites.

Speaking with PUNCH, the deceased’s brother, Taofeek Adebayo, said the 68-year-old was hit by a car while inside a tricycle, adding that he was later taken to a hospital where he died three days after.

“On Saturday morning, an older brother called my wife’s phone. He told me some people had removed Waheed’s head. I rushed down there and discovered that they also removed his hand and intestines.

“Three houses surround the grave and everyone said they didn’t know anything about it,” he added.

A resident, Seun Aribikola, said that the grave was between two buildings with an old grave beside it.

He said the incident was later reported to the police.

“When the police got there, they noticed that his head, right hand wrist, and intestines had been taken away,” he added.

An uncompleted building is reportedly beside the grave occupied by one Alfa.

Aribikola said, “When I entered that uncompleted building, I saw an Ogun shrine, where they poured oil on an iron sculpture.”

Alfa, who identified himself as Rosheed, said he worked in the uncompleted building as an herbalist and a tailor.

He said, “I make traditional herbs to cure illnesses. I live in the third house and use this place as a workshop. I am the only one using this place.”

He noted that he left the workshop (the uncompleted building) around 8pm on Friday and had no knowledge of what happened to the corpse.

His wife, Mujidat, also stated that he only used herbs to cure illnesses.

A resident, who did not want to be identified, insisted that the corpse was removed from the grave in the early hours of Saturday, PUNCH reports.

“This kind of a thing has never happened before in this community,” he added.

He said the case “is under investigation and updates will be provided accordingly.”