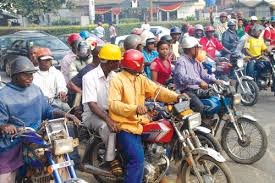 The governor announced that the ban is “indefinite and total”.

The Governor gave out the directive at a meeting with the Commissioner of Police, Area Commanders and Divisional Police Officers (DPOs) at the State House in Alausa.

The fresh Okada ban followed the February 2020 restriction placed on the activities of commercial motorcycles.

Sanwo-Olu said the Government took the decision in line with the State’s Transport Sector Reform Law of 2018 to immediately address the chaos and menace created by the operations of Okada in the listed areas.

He told the police to enforce the order without compromise.

He said, “After a critical review of our restriction on Okada activities in the first six Local Government Areas where we restricted them on February 1, 2020, we have seen that the menace has not abated. We are now directing a total ban on Okada activities across the highways and bridges within these six Local Government and their Local Council Development Areas, effective from June 1, 2022.

“This is a phased ban we are embarking on this period, and we expect that within the short while when this ban will be enforced, Okada riders in other places where their activities are yet to be banned can find something else to do. We have given the notice now and we expect all commercial motorcycles plying the routes in the listed councils and areas to vacate the highways before enforcement begins. The enforcement will be total.

The ban is coming days after Okada riders killed a young man in the Lekki area of Lagos State over N100 balance.

It was learnt that the victim, who was a sound engineer, was lynched and burnt to death after a misunderstanding ensued over the N100 balance with one of the commercial motorcyclists.

How my husband was killed by Okada riders over N100 -Widow

Grace, widow of the 37-year-old sound engineer who was killed by motorcyclists in Lagos State, David Imoh, has narrated how her husband was killed while trying to settle a fight between two friends and his killers.

In an interview with The PUNCH on Monday, Grace said her husband was wrongly labelled as a ritualist and Yahoo Boy before being lynched to death.

They didn’t just beat him, they stabbed and burnt him to death,” the mother of two broke down in tears.

He was burnt as if he is a robber. They have taken my world away from me because of N100. This is not good,” she added.

How my husband was labelled Yahoo Boy, killed by Lagos Okada riders over N100 -Wife
The PUNCH had reported that two suspects have been arrested in connection with Imoh’s death.

The late Imoh, who was popularly called Dave Sound, had an aged mother, a five-year-old boy and another One-year and five-month-old baby.

She identified the two other friends of her late husband involved in the fight as band members of D’Banj and Phyno.

The widow said, “My husband went to work on May 10, I was called on May 13 by one of his friends that we lost him. He said his family should come to the Maroko police station. So my relatives and his own went there. The police told them that my husband and his friend climbed the Aboki (Hausa man)’s bike, and they had an argument over N100.

In the process, one of the Okada guys was hit and he fell down so they started beating them up.
My husband was beaten and they were shouting that he is a ritualist and a Yahoo Boy. After being beaten, he was burnt to death.

Grace, however, explained that the narrative by one of Imoh’s friends made her realise that her late husband was invited to settle the dispute over the N100 balance when he was killed.

She continued, “But on Twitter, a colleague of his put up a video on what happened. She said my husband was setting up in a bar. Being a sound engineer he works with Church of God Mission Garden City, Lekki during the day. He also works with Legacy 360 Band in the evening when there is a show.

My husband was not part of those who mounted the bike. Two guys (band members) took the bike and when they arrived at the venue, an argument happened between the two guys and the motorcyclist.

They gave the motorcyclist N500 and were to get a balance of N100 but the bike man said he didn’t have change. They told him to take N300 but he refused and a fight broke out.

My husband was invited to intervene in the issue. David intervened because of N100 and was killed. He came outside trying to intervene but when they saw that the motorcyclists were overpowering them, they had to run back inside the bar but the bar manager pushed them out. He denied knowing them, David tried hiding but a Hausa lady exposed him.”

Grace, who is a civil servant and a Post Graduate Diploma holder, called on the Lagos State Government to ensure justice in the matter.

All because he wanted to help settle a dispute, he was killed. They have taken away my world. Please Lagos Government, Governor Sanwo-Olu, my Head of Service, Muri Okunola, and others help me, I cry for justice and for the welfare of my children. Please come to my rescue. I’m helpless,” she said.

How do I take care of these kids. I wanted to pursue my Master’s and get my COREN certification as an engineer. Those were his plans for me. My husband is the only one helping me. How will my children go to school?