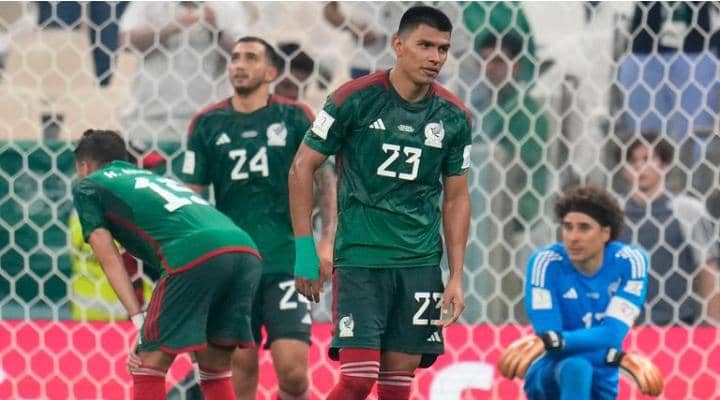 Mexico dramatically missed out on the World Cup knockout phase despite a spirited 2-1 victory over Saudi Arabia, as Poland progressed as Group C runners-up by virtue of a superior goal difference.

In a thrilling finale to Group C at the Lusail Stadium, Henry Martin’s opener (47) and Luis Chavez’s spectacular free-kick (52), combined with Argentina’s 2-0 victory over Poland, left Mexico with three stoppage-time minutes to find the third goal needed to avoid exiting the group due to an inferior fair play points total.

Saudi Arabia’s hopes of securing victory needed to seal their progress into the last 16 failed to get off the ground but, out of nowhere, Salem Al-Dawsari struck in stoppage-time to leave Mexico needing to score two more goals, all but ending their chances of leapfrogging Poland.

The result means Group C winners Argentina will face Australia on Saturday and runners-up Poland will take on France in the last 16 on Sunday, as Mexico reflect on what might have been having left themselves with too much to do after announcing their arrival at the tournament in the final group game.

The drama and tension that was to come was encapsulated by the national anthems, where the majority Saudi crowd’s passionate rendition was matched by the Mexican contingent. It very nearly propelled Mexico into an early lead, but Alexis Vega’s third-minute strike was brilliantly smothered by Saudi goalkeeper Mohammed Al-Owais.

Mohamed Kanno lashed over from a tight angle and Saudi captain Salem Al-Dawsari whistled a free-kick inches over the bar inside 12 minutes before the frenetic start settled and Mexico began to take a grip of the game.

News of Argentina’s second goal against Poland brought Mexico level with the Poles on points and on goal difference, but their inferior fair play points total left them searching for another goal to qualify.

After Martin saw an effort ruled out for offside, the striker blasted a glorious volley over and Chavez was denied a second spectacular free-kick by the diving Al-Owais before Pineda whistled a shot wide with a quarter of an hour remaining.

Uriel Antuna thought he had scored the goal to send Mexico through two minutes from time, only for his effort to be ruled out for offside. News of Argentina’s victory filtered through but with a crucial third goal not forthcoming, Mexico’s desperation left them exposed defensively and Al-Dawsari pounced to extinguish their hopes.