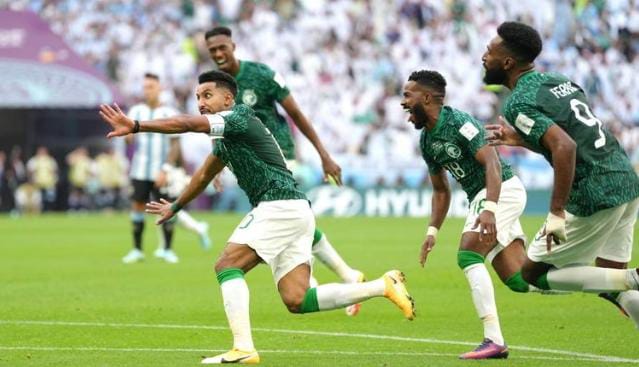 Saudi Arabia produced one of the greatest shock in World Cup history as Salem Al-Dawsari’s stunning solo effort secured a 2-1 victory over Argentina in Group C at the Lusail Iconic Stadium.

Time stood still as Al-Dawsari plucked the ball out from the sky and turned inside two Argentina defenders before curling his finish beyond the reach of Aston Villa defender Emiliano Martinez, producing one of the biggest moments of any World Cup finals.

Lionel Messi had given one of the pre-tournament favourites the lead from the penalty spot after a contentious VAR decision but Saleh Al-Shehri levelled just three minutes into the second period to set up an almighty upset.

The result ended Argentina’s 36-game unbeaten run, stretching back to defeat against Brazil three years ago but this was the greatest day in Saudi Arabian football history.

Argentina came with the intention of winning this tournament and so beating Saudi Arabia always looked like a box that just needed to be ticked.

The two-time World Cup champions next face Mexico on Saturday, kick-off 7pm, where victory is vital if they are to have any chances now of progressing. Argentina need at least a point to avoid throwing their hopes of progression into serious jeopardy.

Saudi Arabia are back in action against Poland earlier that day, kick-off 10am, and a win would all-but seal their progression to the knock-out stages, and most likely as group winners.