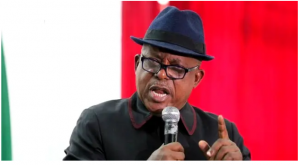 Wants him to tender public apology

Prince Secondus is claiming that the allegation by Prince Afegbua published by several media establishments within and outside the country alleging that he misappropriated the sum of Ten billion Naira belonging to the PDP libeled him “as nothing of such happened.”

In the writ of summons filed by Emeka Etiaba, Senior Advocate of Nigeria, SAN against Prince Afegbua, and some media houses, Secondus is seeking a declaration of the court that Prince Afegbua “has failed to prove that the Peoples Democratic Party generated the sum of N10, 000, 000, 000.00 (Ten Billion Naira) from sale of Nomination Forms and/or other sources since 2017.”

Other prayers include, “a declaration that the publications complained against are false and malicious.

“A declaration that the false and malicious publications made by the Defendants against the Claimant (the subject matter of this suit) is defamatory.

“An order of this court directing the Defendants to publish a written apology in all the News and Social media platforms including but not limited to the Daily Trust Newspaper, Daily Sun Newspaper, This Day Newspaper, The Guardian Newspaper, Punch Newspaper, Pilot, New Telegraph, The Nation, Nigerian Television Authority, African Independent Television, Channels Television among others where the Defamatory materials were published and in particular, the 2nd and 3rd Defendants’ Newspapers.

“An Order of Perpetual Injunction restraining the Defendants, their agents and privies from further making the defamatory publications against the Claimant.

“Damages for the sum of ₦5,000,000,000.00 (Five Billion Naira) only, being general damages for the humiliation, castigation, vilification, attack of the Claimant’s integrity and person by the defamatory publications.”

The PDP chair further claimed that the publications were false and the said publications which the 1st Defendant knows to be false have brought him to odium and have seriously challenged his right standing in the society as a trustworthy character.

Prince Secondus also noted that “the libelous publications have been read by prominent members of the Peoples Democratic Party, members of the public (both Nigerians and non-Nigerians) as they were published in several news and social media such as Facebook, Twitter, Instagram and others operating both in Nigeria and in the whole world.

“And that the fact that the publications were read by the general public has been confirmed further by the phone calls that have trailed the said publications which calls were put across to the Claimant by his Pastors, Governors, Senators, Honourable Members of both Federal House of Representatives and State Houses of Assembly, Commissioners and many prominent members of the Peoples Democratic Party nationwide have portrayed his personality in bad light.”

He added that “in the estimation of the right thinking or reasonable members of the public, their perception of him are that he is a person of fraudulent character, a person lacking in sincerity and integrity; person with greedy character; an incompetent personality in management of such an exalted office of the National Chairman of the PDP; an evil and untrustworthy person; and a person not worthy of public trust.

Before heading to court Prince Secondus had through his counsel Emeka Etiaba SAN claimed he had written to Prince Afegbua to retract the publication and apologize but he refused.

Meanwhile, Kassim Afegbua has expressed his readiness to meet with the PDP chairman in court.

According to him, “we will meet in court. Courts are for human beings. What does he mean by asking for a retraction? Retract what?” he asked when our correspondent got in touch with him concerning the issue.