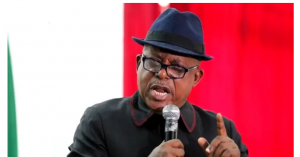 National chairman of the Peoples Democratic Party, PDP, Prince Uche Secondus now has the next two months to avail his party the most of his experience garnered over the years. The past three months were particularly difficult for him as he bore the burden of leadership, taking flaks for all the wrongs that came the way of the PDP.

While some of those who kicked against his continued chairmanship of the party faulted him for doing little in putting the ruling All Progressives Congress, APC, on its toes; others blamed him for the exit of prominent members including Governors Dave Umahi, Ben Ayade and Bello Mattawale of Ebonyi, Cross River and Zamfara states respectively. Worried by the implication of the mass defection; some members of the party called for Secondus’ resignation, vowing to leave the party should he fail to heed their warning.

On Tuesday, leaders of the party including all elected PDP governors, former governors, serving and past members of the National Assembly as well as other leaders including members of the Board of Trustees, National Executive Committee, NEC, amongst others, pacified the aggrieved parties, as they brought forward the national convention due to have held in December to October this year.

By this development, the Secondus-led NWC is fated to remain in office until December 10 when a new set of leaders are expected to take over.

Rivers state governor, Nyesom Wike, the man who bankrolled Secondus’ election in 2017 wants him out and has not shy away from expressing dismay over the chairman’s stewardship. Fresh from labeling the NWC as tax collectors, liars amongst sundry derogatory appellations, he took on Babangida Aliyu, former governor of Niger State, who was bold enough to identify Wike as Secondus’ biggest foe.

At a series of meetings held by the various caucuses of the party recently, Wike made it known that the current leadership lacks what it takes to take the PDP to the epicenter of national decision making in 2023 and reiterated his desire to see Secondus go. He enlisted the understanding of seven national officers, who were later backed by a handful of NWC members.

However, the plot to remove Secondus was a bit herculean as he had on his side seven governors including Godwin Obaseki, Darius Ishaku, Bala Mohammed, Udom Emmanuel, Duoye Diri, Ifeanyi Okowa and Okezie Ikpeazu of Edo, Taraba, Bauchi, Akwa Ibom, Bayelsa, Delta and Abia states respectively.

Given the support of these governors coupled with the solidarity of a good number of NWC members, kicking out Secondus was a challenge just as his decision to stay put was proving untenable.

The PDP leaders therefore came up with the resolution of holding the party’s convention earlier than schedule; a development that appears on the surface, acceptable to both parties. Although, it is not clear if Secondus will seek a second term; it is most likely that he would be contended to see out his tenure, having been assured that his leadership would not be truncated.

Speaking exclusively to Vanguard, national publicity secretary of the party, Kola Ologbondiyan, said “all internal crises have been resolved as our elders and leaders have demonstrated sufficient leadership.” According to him, “Secondus will see out his tenure and will continue to work hard toward strengthening the party ahead of 2023 general elections as the PDP is set to form the new government.”

Also speaking, deputy national publicity secretary, Diran Odeyemi said with the leaders’ intervention, “all is now settled,” noting that “we cannot go against the directive of our elders.”