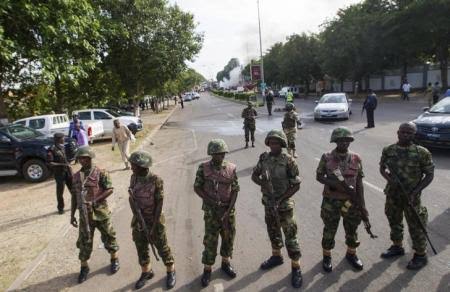 Following the report that violence erupted and gunshot spree on Thursday evening during the National Convention of the National Association Of Nigerian Students (NANS), scores of soldiers have arrived the convention venue at the old parade ground to restore normalcy.

Soldiers and other security men were seen storming the venue while the gate to the entrance have been closed.

It’s not sure if the soldiers were invited as old parade ground is adjacent the Army Headquarters.

Students and stakeholders were seen outside the gate discussing on the necessary steps to take so as the convention should continue.

Crisis started around 6:30pm on Thursday when some suspected cultists stormed the convention venue to cause havoc and clashed with the operatives of the security men.

Students ran for safety when gunshot were spree and violence erupted between the suspected cultists and operatives of Department of State Services.

As at the press time, soldiers and other security men have arrived the convention venue to ensure normalcy.