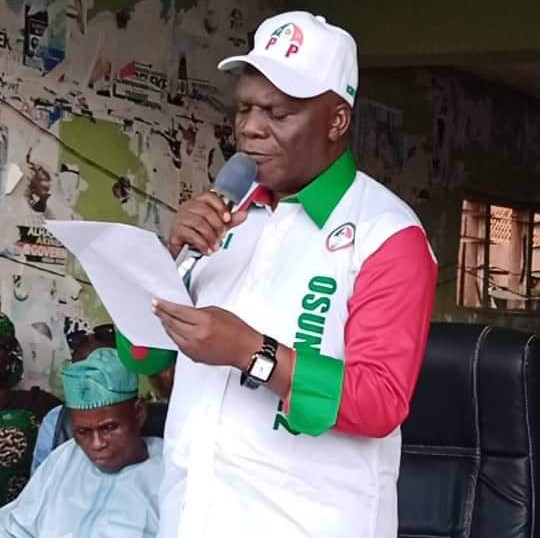 The new Chairman of the People’s Democratic Party in Osun State, Hon. Sunday Bisi has called on every members of the party to work together towards wrestling the state from the present ruling All Progressives Congress.

Bisi made this call on Tuesday in Osogbo, during a press briefing shortly after he was sworn in as the Chairman of the party.

He said the party is set to face the onerous task of rescuing the “silently dying people of the state” by defeating the APC in the 2022 governorship election.

“The task ahead of all of us in Osun PDP today is very clear. The task simply begets the need for us as a party to respond without wavering, to the loud whisperings of the electorate in restoring the State to the path of dignity and prosperity for them and for all of us, indigenous inhabitants, who have no other place to call our home come rain, come shine.

“It is clear that the charlatans at the saddle presently in the state are bereft of umbilical cord of empathic connection with the yearnings of the people of the state because majority of them who call the shots and mould the backstage policies in their cult-like assembly have nothing to look up to like the biblical treasure, strong enough as source of inspiration to keep their mind and administer the state with fear of God and empathy. They are too disconnected and preoccupied with serving the ruinous interest of their god of Mammon than serving the state and saving it from economic deprivation. They cannot help it because Osun to them, is purely a political shopping mall, where they trade and elope to their base.

Achieving this onerous objective of bringing Osun State back to the doorsteps of Osun people however, requires collective efforts and responsibilities. Now is the time for every party official from unit to the state level to discharge their respective duties with conscientious dispatch and uncompromising discipline. There’s no time to waste and I expect we are all aware of this.”

While calling on all aggrieved party members to sheath their swords, the former Publicity Secretary of the party, said it’s time for everyone to consider the interest of the people of the state. He also enjoined those jostling to get party tickets to beware of sacrifices that are necessary.

Bisi said, “I stand here today to appeal to all who feel embittered for whatever reason, to please sheath their swords in the interest of silently dying people of our dear state who are investing so much confidence, support and hopes in our capacity as a tested ray of light after the current tunnel in the state.

“As members of a very big political family like the PDP, it is almost certainly impossible to avoid occasional misunderstandings or misinterpretation of tongues. But our strength should be stimulated majorly by our ability to put the bigger picture of rescuing the state from the present hawks, beyond and above hollow personal propositions.”

In his address, the outgoing acting Chairman, Sunday Akanfe Atidade appreciated every political office holders, party leaders and all members for their support during his short stint as that leader of the party.

Atidade said his short term as the Chairman witnessed the return of several political bigwigs back into the party. He also called for support for the new Chairman.

“The level of encouragement I received from individuals and various interests in the party gone a long way in assisting us to cement ligament of unity in the party with a number of steps taken in this direction.

Together with understanding and support of other State Working Committee Members, we were able to lay fresh foundations required to successful confront tasks and challenges ahead of us. A number of Committees including Local Government Election Participation Committee, Legal Committee and Reconciliation Committee in which they all did wonderfully well and delivered the expected results. I am glad that members of these Committees have turned out useful suggestions and reports which I believe the party will build upon under the leadership of our new chairman.

To the glory of God, in the last few months in Osun State PDP under my leadership, we have at one point or the other received members of the other political parties to the fold of PDP. Among them are Members and leaders of the SDP in Osun State also known as KOSEMANI GROUP led by Dr. Bayo Faforiji, who joined PDP in their hundreds of thousands across the 332Wards of the state. Also members from the APC, ADP and ADC who were officially received to PDP in Irepodun LG on the 1st October, 2020, amongst other notable additions to the party.

While I congratulate our new leader of the team, the Chairman of the party, Hon Sunday Bisi on this new assignment, I urge you not to rest on those qualities that have earned you this new status.” 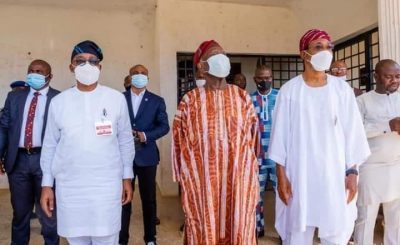 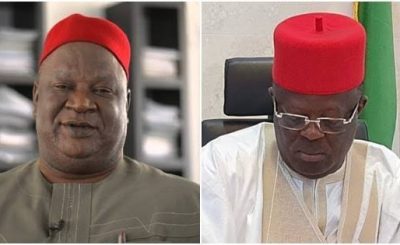