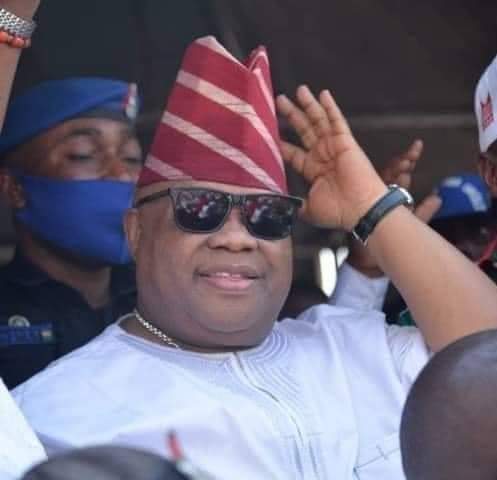 The paramount ruler of Ede, Oba Munirudeen Lawal has directed residents and indegenes of Ede to vote massively for Senator Ademola Adeleke and ignore 2026 false promise of governorship rotation to Osun West.

Speaking while receiving the PDP governorship candidate at Ede today, the traditional ruler tasked heads of families and quarters in the town to mobilise house to ensure to deliver Ede votes to one of their own whom he described as capable and competent to govern the state.

The royal father who recalled how Adeleke was rigged out in 2018 declared that Osun West now has another historical opportunity to claim the governorship especially as Adeleke has all what it takes to compete and win the election.

While acknowledging the very popular support Adeleke has garnered across the state, the royal father thanked Osun indegenes for their show of love for Adeleke and tasked them to troop out enmasse and make their votes count.

He specifically urged voters across Osun West not to wait for a 2026 governorship promise for Osun West , insisting that this is the time to vote for Osun West through the candidature of Ademola Adeleke.

Recalling how he has been severally blackmailed for supporting his children gunning for top offices, the scholar King said loving one’s town is part of love of God, affirming that he remains committed to the Adeleke project despite pressure and intimidation.

The paramount ruler had on Wednesday strongly denied news reports quoting him as directing people of Ede to vote for Gboyega Oyetola, describing the news as “fabricated lie”

The traditional ruler noted that he had only received the Governor and his entourage at his palace in compliance with tradition, noting that “at no time was any directive issued in support of the Governor.

Senator Adeleke in his remarks at the palace described the royal father as a faithful father of all Ede people , promising that he would not let the royal father down for the confidence deposed in him.

Senator Adeleke who was overwhelmed by the depth of the royal father’s endorsement and support plegded to be a good ambassador of Ede if elected Governor of Osun state.

View all posts by Habeeb Ajani →