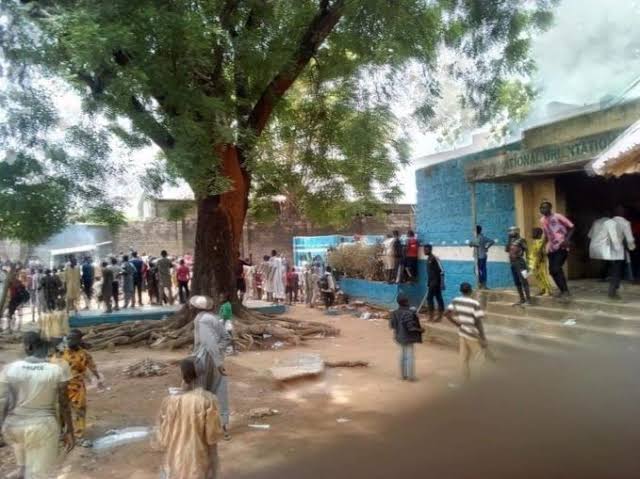 It was a tragic moment at the office of Federal Road Safety Corps located at the Old Toll Gate, Ilese town near Ijebu -Ode, in Ijebu North-East local government area of Ogun State, as three officials were struck to death by mysterious thunder lightning which occurred in the early hours of Wednesday.

According to Vanguard, the incident occurred around 10 a.m following a little rainfall which was accompanied by the lightning that entered into the FRSC’s office located at the old Toll Gate in Ilese town where it killed its victims.

It was gathered that the thunderstruck while the FRSC officials were planning for the early morning parade within the vicinity of their office located at the old toll gate.

Though no official statement has been released to the effect, a senior member of the Corps, who spoke with VANGUARD on condition of anonymity disclosed that there were about twelve officials in the exact office when the lightning occurred, accompanied by the thunder which struck three of his colleagues to death.

When contacted, the FRSC Public Relations Officer in the state, Florence Okpe also confirmed the incident but declined further comments.

Okpe, who promised to issue a statement later in the day, said that until the corp’s Sector Commander, who has hurriedly gone to Ilese in order to ascertain what really transpired returned, she wouldn’t be able to give a clear statement on the incident.

As at the time of filing this report, men of the state’s special security outfit code-named “OP MESA” have taken over security of the entire area, chasing onlookers away and preventing journalists from taking pictures.

Also, traditionalists worshipers otherwise known as Sango adherents have joined other FRSC officials at the scene of the incident in Ilese Ijebu in a bid to perform some traditional rites on the corpses before they are released to government officials for burial. (Vanguard)