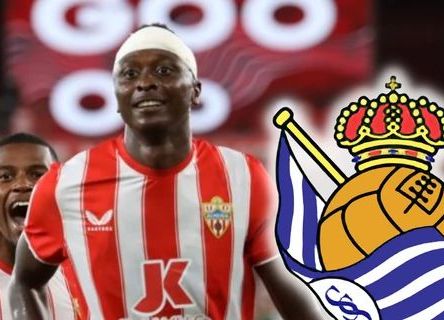 Real Sociedad have identified Umar Sodiq, the Super Eagles and Almeria star as the perfect replacement for their former striker.

Almeria and Real Sociedad are currently in talks over a deal for Super Eagles striker Sadiq Umar.

The 25-year-old striker has been instrumental to Almeria’s return to La Liga this campaign, having won the La Liga Segunda league last campaign as well the the highest goalscorer award in the league.

Umar was initially targeted by La Liga side Villarreal.

However, the Yellow Submarines failed to reach an agreement with Almeria for his signature and talks broke down.

The Super Eagles striker was also linked with a move to Bundesliga giants Borussia Dortmund this summer, but the deal never materialized.

However, reliable transfer journalist Fabrizio Romano, now reports that Almeria and Sociedad are closing in on an agreement for the striker this summer.

Sociedad are hoping to sign a replacement for their former Swedish frontman Alexander Isak, who was sold to Newcastle in a £60m deal last month.

The fee is believed to be in the region of N11bn(£24 million) should an agreement be reached.

Umar Sadiq has become a player in high demand across Europe following his performances with Almeria.

The former Rangers loanee has no doubt had an impressive career since his move away from Scotland, having impressed at Partizan before joining Almeria in 2020.

Umar has already scored 2 goals in his side’s opening three fixtures in La Liga this campaign with both goals, each coming in Almeria’s last two games against Elche and Sevilla.