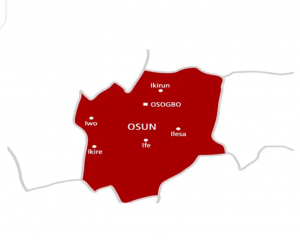 Two brothers were on Saturday evening crushed to death after their motorcycle slide under a moving truck.

It was gathered that the victims, yet to be identified, were trying to overtake the truck when a minibus suddenly appeared ahead making them lose control of the motorcycle.

An eye witness, Abiodun Ahmed disclosed that the accident occurred immediately after Shasha junction on Osogbo-Obokun road in the state capital around 4:30 pm.

He added that the Korope driver was left helpless as he could not swing off to the side because of the drainage while an attempt by the young man riding the motorcycle led to the loss of control.

“There is drainage and valley on the side of the road, so the Korope driver could not swing to the side and suddenly the rider lost control of the motorcycle and slid under the truck.

The truck drive directly on their head crushing the motorcycle and killed the brothers on the spot”, he said.

Osun Police Command spokesperson, Yemisi Opalola confirmed the incident but added the identity of the corpse is not known yet.