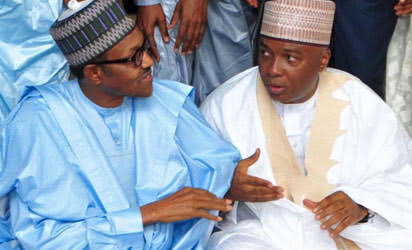 President of the 8th Senate, Bukola Saraki has said he saved President Muhammadu Buhari from being impeached by the National Assembly for granting anticipatory approval for the payment of $496,374,470 for Tucano fighter jets without legislative approval or any budgetary provision.

The Peoples Democratic Party (PDP) 2023 presidential aspirant, who was reacting to a statement by the Buhari Media Office BMO) that he wanted to remove the President, said even though Buhari’s action was a grave violation of the law, said he rejected a point of order raised by Senator Mathew Urhoghide to discuss the infraction.

The former Kwara State governor said in a statement by Yusuph Olaniyonu, head of his media office, that he did not allow the motion for discussion by the Senate to save Buhari the embarrassment. He reiterated that his intervention made it possible for Nigeria to purchase the 12 Tucano aircraft to fight terrorism.

According to the statement, the American government refused to sell military equipment to Nigeria because the country was then categorised as one of those nations whose military engaged in violation of the rights of the citizens.

It cited Section 362 of Title 10 of the US Code, otherwise called the ‘Leahy Law’, which prevents the US from providing equipment, training, and other assistance to a foreign security force if the Secretary of Defence has credible information that such unit has committed a Government Violation of Human Rights (GVHR).

“Thus, whatever discussion the US President Donald Trump was said to have had with his Nigerian counterpart, the US policy was not about to change, except Congress agreed to such a change.

“Most importantly, the US would not change such an important policy without the guarantee from the beneficiary country’s legislature,” the statement added Saraki said he held a closed-door meeting with then US Ambassador to Nigeria, Stuart Symington, on April 12, 2017, where the sale of the Tucano jets was the main issue for discussion.

He said: “The main issue for discussion was the sale of the Tucano jets and the setting aside of the restriction imposed on Nigeria under the Leahy Law.

“Unlike Nigeria, particularly under the current government, where the legislature is treated with contempt, the Americans would not have set aside the restriction on the sale of military equipment imposed under an extant law without a guarantee from the Congress.

“At every point when it was needed, the Senate under Saraki gave support to the transaction and guaranteed to the visiting congressmen that it would intensify oversight over the military to ensure there was no repeat of violation of citizens’ rights.” (New Telegraph)