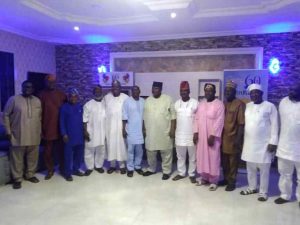 A Socio-political group, Opomulero Osun has said that it is committed to the reelection of Governor Gboyega Oyetola for second term in office.

They reiterated their commitment towards strengthening the party, ensuring unity and oneness amongst members and supporting the leadership in its drive for good governance and delivery of dividend of democracy in the state.

The group also enjoined residents of Osun to support the second term reelection of Governor Gboyega Oyetola so that the legacy of good governance and delivery of dividend of democracy witnessed in the last ten years can continue.

Explaining that it is only a strong and united party that can provide the platform for any future aspiration of any member. The group pledged its readiness to work in the coming months and make both party leadership under Prince Adegboyega Famodun and the victory of Governor Oyetola in the 2022 gubernatorial election a foregone conclusion.

The group commended Governor Gboyega Oyetola for the unprecedented achievements of his administration in the past two and half years.

“It was because God loves us in the state that makes it possible for us to have such a cool, calm and cerebral person at the helm of affairs of the state at a time like this.

“Despite the paucity of funds, the Governor has been able to touch the lives of the people through provision of good roads, functional healthcare development, revitalizing the educational sector, constant and unhindered payment of full salary to all workers and reduction of the heavy burden of pension and gratuity through monthly allocation of huge amount of money amongst other achievements”, the said.

In his response, the State Party Chairman Prince Adegboyega Famodun expressed delight in the coming to the forefront of notable figures that have made their marks in one area of governance or the other.

He said the task ahead though enormous, the contribution of each and everybody will lessen the burden and makes achieving success easy.

He also commended the administrative skill of the Governor saying that it has made achievements of all that was stated above possible and urged the members to go back to their various constituencies and get more involved in party activities promising his support and cooperation to the group but said everybody must be seen to be working in unity of purpose.