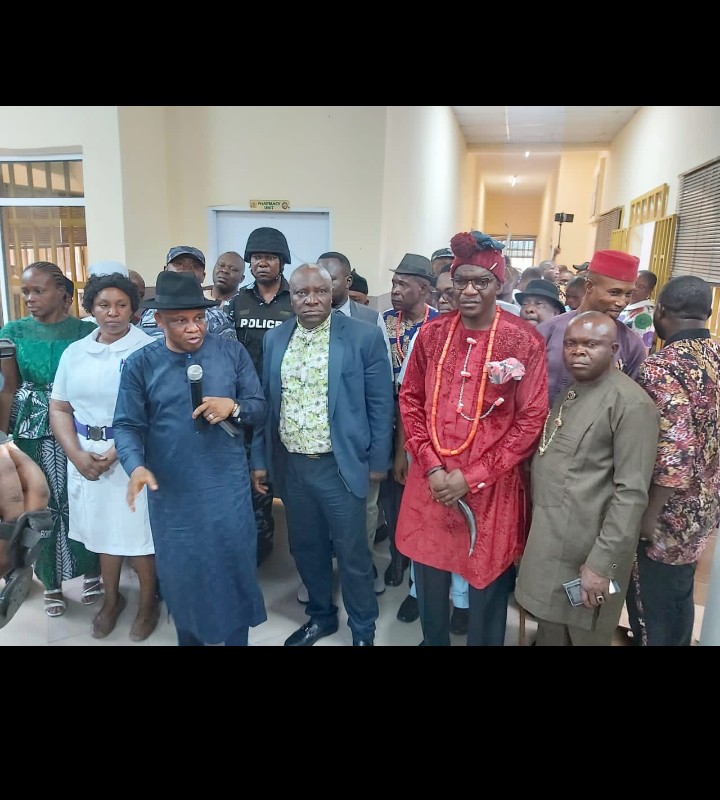 Dr Akwa stated this during the official commissioning and handing over of the Health Centre in Taabaa Community. The Interim Administrator, thanked President Muhammadu Buhari for approving and prioritizing the completion of this project in line with the government’s rural developmental plans.

He commended the Traditional Ruler and the youths in Taabaa for giving the contractors the necessary support needed to complete this project, stating, “if all youths and traditional institutions support contractors the way Taabaa has done, the era of abandoned project will be a thing of the past”, he added.

Dr. Akwa reiterated that with this kind of facility in place, coupled with accommodation for the Resident Doctor, Nurse and Lab Technician, “we have brought modernised 24 hours medical care closer to the people of Taabaa and its environs”.

In his remarks, the Traditional Ruler of Taabaa Council of chiefs, HRH Mene MSK Nule commended NDDC for it’s timely intervention and handing over of the health centre for use. Stating “it’s a great relief that my people will easily access modernised medical services in the community”. He noted that the community will preserve and protect this facility in other to reap maximum benefits from it and attract more developmental projects to the community by NDDC.

He further averred that prior to the renovation of this Centre, the hospital was dysfunctional which made it difficult for the people to assess proper medical care, while some indigenes had to go as far as 30km away from the community to have access adequate medical care.

The Director, Disease Control, Rivers State Primary Healthcare Management Board, Dr Ekanem Nyarawo was elated about the facility on ground stating “with the equipments and resident accommodation for staff, I have no doubt that medical service here will be improved upon”. He thanked the NDDC for its support to the Rivers State Government.

Dr. Akwa was speaking to newsmen at the commendation service of the former minister of the Federal Republic of Nigeria, held at Riyal House of Grace, Port Harcourt.

“It is clear that our late leader is not just a Rivers man, but a great product of the Niger Delta,” the NDDC boss said. “You could clearly see this with the turnout for the commendation service in his honour. Many of us as young men learnt a lot about leadership following his footprints. He may be dead, but his legacies and footprints in our nation live on.”

Kwara hospital board gets new head

I was miraculously cured from stage 3 endometriosis – Nollywood Actress