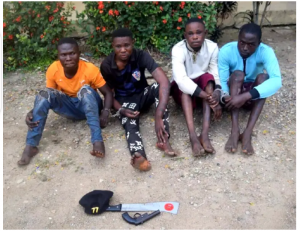 A suspected armed robber, Sefiu Adeboye, 22, has disclosed that his gang drove a Toyota Corolla vehicle stole from a mission house at Akiriboto in Osun state to Abami Eda shrine to enjoy themselves.

Fielding questions from journalists during a parade of suspects at the state police command headquarters in Osogbo, he said they snatched the car at gun point from the building on Saturday, July 17 around 1am and drove straight to the shrine in Lagos state, where they spent N7,500 on drinks.

He added that they were arrested while returning from the trip around Warewa bridge the following day while trying to go and dump the car by the road side in the town.

“We were invited by a resident in the town known as Baba Papa to come and rob the Pastor but we didn’t get money, so we had to cart away the car with intention to return it back to the community and dump it the following day”, he said.

Other gang members have run away. The gun we used for the operation, which was our first, belong to papa.

The other member of the gang paraded include one Adekunle Odekanyi, 21, while a third suspect, Adewale Simon, 37, claimed he was a guard at community palace and was never part of the gang.

While the car, a laptop, five android phones, a small Itel phone and charms were recovered from the suspect.

Addressing journalists on behalf of the Commissioner of Police, Olawale Olokode, the command spokesperson, Yemisi Opalola, said six other suspects were also arrested for various crimes.

She disclosed that suspected Aye cultists, Ridwan Kolawole, Okiki Sikiru, Rasaq Adebayo and Olalekan Afeez were arrested on Sunday, July 25 while planning to unleash mayhem on the state.

A cut to size locally made pistol and a black berret with 77 logo of Aye confraternity was recovered from them.

She added that one Sandra Bisong, who specialised in stealing phones was caught on Monday, July 26 in the state capital while 18 years old, Matthew Ajayi, was arrested after burgling two shops.

However, Ajayi who claimed to be 17 years old said he only stole beer and sold it to beer parlour owners.

Opalola however disclosed that the suspects would be arraigned in court upon completion of investigation, adding that the command would not relent in checking criminality in the state.