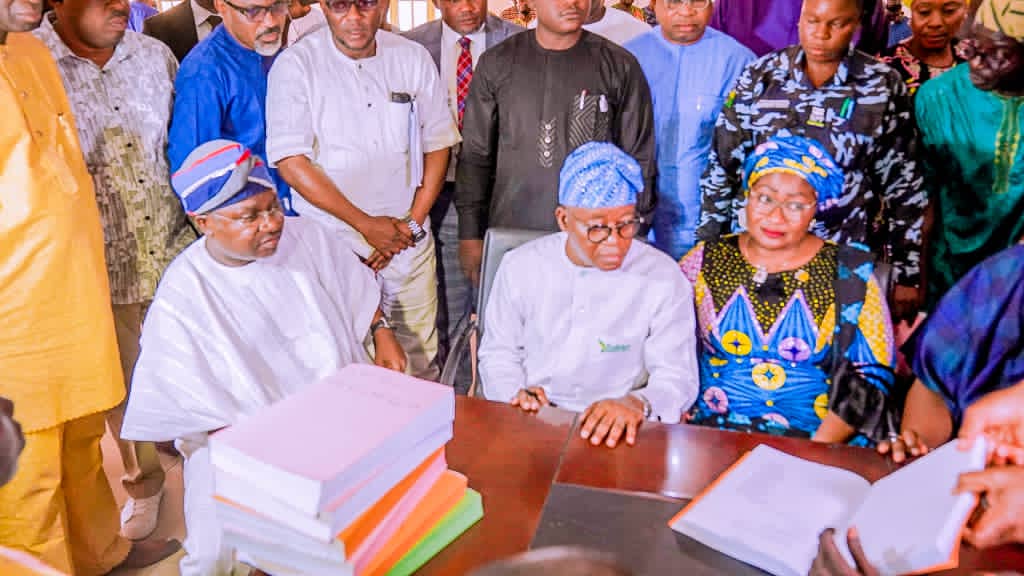 Following the outcome of the July 16 governorship election in Osun, Governor Adegboyega Oyetola and his party, the All Progressives Congress (APC) on Friday filed a petition before the Election Petition Tribunal sitting at the State High Court, Osogbo.

The petitioners who were seeking justice challenged the results of the election in some of the Local Government Areas and prayed the Tribunal to return their mandate to them.

Governor of the State, Mr. Adegboyega Oyetola was physically present at the Tribunal to sign the petition filed before the tribunal.

Recall that the Independent National Electoral Commission (INEC) had declared Senator Ademola Adeleke winner of the July 16 governorship election having polled a total number of 403,271 against 375,027 polled by Governor Adegboyega Oyetola.

Addressing journalists shortly after the petition was filed, signed and sealed, one of the petitioners’ Counsels, Mr. Kunle Adegoke (SAN) expressed confidence in the substance of the petition to ensure victory for Governor Adegboyega Oyetola and the ruling party.

According to him, the legal team of the petitioners have established fundamental grounds to seek justice and ensure victory for them in view of the substance of the case.

“We ‘re here to file a petition on behalf of Governor Adegboyega Oyetola and the All Progressives Congress (APC) in respect of July 16 governorship election in the State. The petition has been filed and it has been received by the registry of the tribunal.

“In the next few days, activities will be in top gear in respect to the proceedings of the tribunal. So, we are here today with the petition which has fundamental grounds upon which we believe the election ought to have been returned in favour of Mr. Adegboyega Oyetola and All Progressives Congress (APC).

It was gathered that the 1,240-page petitions were challenging the results in 749 polling units across 10 local government areas in the State.

Also, the State Chairman of the All Progressives Congress (APC) while fielding questions from journalists, expressed confidence in the substance of the petition saying ‘by the grace of God, we will win the case and come out victorious”

“We are here today to file our election petition to challenge the outcome of the July 16 governorship election in Osun. We just filed it, signed and sealed for the tribunal to take over from there.

“By the grace of God we are confident of victory. The members of the party are in tune with me that is why you see many of them here with me. A lot of people are here today believing that we have a good case and by the grace of God we will have a cause to jubilate at the end of the case”, Famodun said.